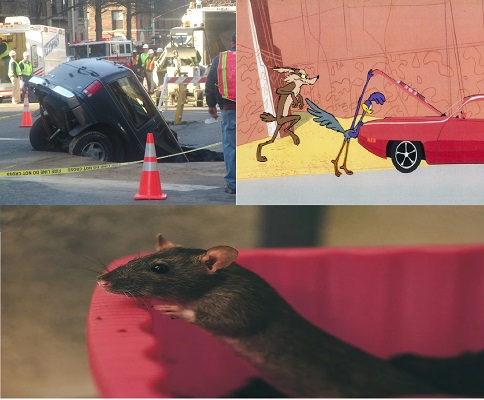 Drivers in Okanagan B.C. are facing a pesky problem this season as there has been an extreme increase of rat-related damages to vehicles.

Mike Vasconcelos of Mike VS Automotive has had first-hand experience with rat-caused repairs, as one of his customers brought in real security footage of a rat nibbling under the hood at his home.

According to Vasconcelos, there has been a major increase in “this kind of damage,” since last year, and some repairers are not sure how to handle it.

“The increase we’ve seen in this last year or so has been 10 times what we would normally see,” Vasconcelos told Global News.

According to reports, Okanagan repairers have been discovering rat nests, dead rats, and rat-sized holes in all different parts of vehicles being brought in.

Repairers have suggested the B.C. residents should use scents like peppermint oil to ward off unwanted pests and avoid leaving old Cheetos in between car seats.

The city of Los Angeles has just paid $4 million in a lawsuit after a woman’s car fell into a massive sinkhole in early 2017.

Stephanie Scott was on her way home from work when her vehicle suddenly fell into a collapsing sinkhole, submerging it into rushing water and dropping her twenty feet below ground.

According to incident reports, the power of the water flipped Ms. Scott’s vehicle over multiple times, and once she was able to exit her vehicle, Scott had to stand on top of her upside-down car to call the police.

To make matters worse, after help arrived, a minivan crashed on top of her car, further squashing it and causing greater damage.

Scott has now been awarded $4 million for the massive damages, injuries, and the gross negligence of the city.

According to the city, the sinkhole was a result of excessive rain and sewage failure.

Coyote and the Road Runner

When a Manitoba driver struck a coyote with his car on his way to work, the last thing he expected was for the injured animal to hijack his ride.

Unsure of what to do with the unconscious creature, the man did what almost any Canadian would, and placed the struck coyote in the passenger seat of his car, continuing on his trek to work.

However, upon his return to his vehicle for his lunch break, the not so smooth-driving samaritan noticed that the coyote was fully awake and sitting in the driver’s seat of the car. Seemingly unscathed.

Frightened of how the coyote may avenge that morning’s accident, the man reached out to animal services, who kindly transported the coyote to a recovery facility.

The coyote is now back to its regular health – and much like the Manitoban man’s vehicle – had escaped without a scratch.