Battle of the Builders: Canadian car builders to compete at SEMA Show 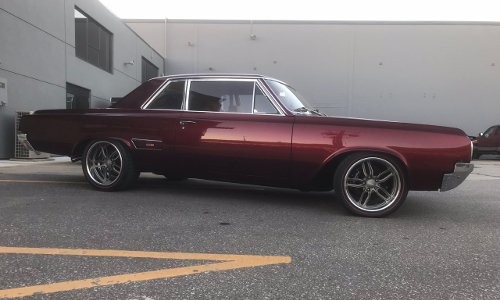 Las Vegas, Nevada — October 27, 2017 — A number of Canadians are competing in the Battle of the Builders competition at this year’s SEMA Show in Las Vegas.

The fourth annual Battle of the Builders competition will see more than 250 top vehicle builders create custom cars and trucks to compete across the Hot Rods, Trucks, Sport Compact and Young Guns categories.

Competitors will be shortlisted into the Top 40 Builds, which will represent all of the respected categories, before industry judges select a final 12 competitors. The top 12 vehicles will be re-located to a designated area where the finalists will vote amongst themselves to decide who will be named the winner.

The competition winner will then be announced during the nationwide television taping at SEMA Ignited on Friday, November 3. SEMA Ignited is the official SEMA Show after-party where thousands of consumers join SEMA showgoers.

“It’s great to see the amazing array of vehicle builds at the SEMA show each year,” said Peter MacGillivray, SEMA Vice President of Events and Communications. “It’s inspiring to watch the SEMA Battle of the Builders competition, as we meet the builders and learn about the products and stories behind the cars and trucks.”

This year’s competition will also include a special recognition of builders 27 years or younger, named ‘Young Guns’, who enter the contest with a vehicle. The recognition serves to inspire and encourage young builders to pursue their passions and shine the light on the up-and-coming customizers.

Overall, a total of eight Canadian competitors will take part in Battle of the Builders with the hopes of being named the winner at Friday’s final results.

One of the Canadian competitors at this year’s competition, Jordan Henke of JH Restorations, has customized a 1965 Oldsmobile Cutlass, which has been affectionately named “The Getter.” The car features a transplanted 6.0L LS engine, Wegner Automotive accessory drive system, a more rigid, braced and welded 1965 GM A-Body, as well as Camaro bucket seats and an updated interior.

Speaking to Collision Repair magazine, Henke commented: “SEMA asked if we wanted to be involved  with the competition back in January so it has been a rush, and a lot of long hours and stressful work, to get the car finished on time. Saying that, it has been a great experience to customize the car and we have enjoyed every moment of it.

Meanwhile, Jamie Campbell of e-commerce site Grounded Concepts in Ontario, has built a 2013 Nissan GT-R for the Sport Compact category: “I have always been an enthusiast and I have been building cars since I first had my driving licence,” he said. “The GT-R we are showcasing at this year’s SEMA show features a Skipper Designs body kit. There is only two other body kits of its kind in North America.”

Also competing will be Rod Nielsen, of Hot Rod’s Restos, who has customized a 1970 Mazda R100 with an wider-than-stock body kit built from scratch and will be painted using SATA equipment. It has been designed as a state-of-the-art race car that will still be legal for the street.

“I have been building my own cars for more than 20 years, and selling auto parts for over 24 years. It has all been a self-taught process. The car at this year’s SEMA will have a wide body kit built from scratch and 1,000 wheel horse power, as well as a new wheel that we have created. We’re looking forward to the show and showcasing our creation,” said Nielsen.

“Painting a show car requires a high performance spray gun that’s designed to deliver perfect finishes,” says April Chadwick of SATA Canada. “We’re proud to have provided Hot Rod’s Restos with our guns and other equipment, in particular the SATA RPS cup system. When you’re working on a competition show car, there’s no time to waste.”

J.J. Dubec, who has built what he claims to be the world’s first widebody LibertyWalk 2017 Acura NSX, will also be competing at SEMA. The vehicle features the world’s first Titanium valvetronic Armytrix exhaust and AirLift Performance oriented airbag suspension.

Dubec, who is a full-time doctor by trade, fulfills his passion of customizing cars in his spare time. “It’s not always easy juggling duties as a dad, doctor and customizer. Some of the keys for me are getting my kids involved with the projects and cars, that way we are spending time with each other,” Dubec told Collision Repair magazine.

“Also, recognizing talented team members and having them involved is a huge time saver. Work usually gets done right the first time and learning from experts is great for expanding my own knowledge base.”

The competition and its full list of builders, vehicles, and manufacturers are profiled in a one-hour television special that will air exclusively on the Velocity Network in 2018. Exclusive online footage will also be posted at sema.org/botb, featuring additional behind-the-scenes stories and interviews.

To learn more about the 2017 competition, visit sema.org/botb.