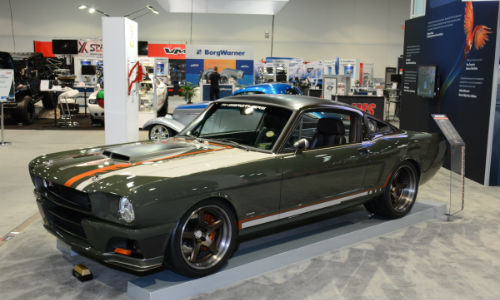 Southfield, Michigan — November 23, 2015 — The show’s over, but the awards and announcements continue. Numerous vehicles featuring paint from BASF’s Glasurit and R-M product lines received awards and industry recognition at the 2015 SEMA Show.

“It’s an honour for our paint brands to receive recognition at SEMA and be used by some of the most talented car painters, designers and builders in the industry,” said Dan Bihlmeyer, Head of Marketing, Automotive Refinish, BASF Corporation.

– Mothers Shine Award – given to the Goolsby Customs 1969 Ford Mustang painted in Glasurit 55 Line Goolsby Platinum, this award is presented to the car that represents the very best of what is shown at SEMA.

– Goodguys Gold Award – awarded to the 1965 customized carbon fiber “Espionage” Ford Mustang from the Ringbrothers, painted in Spy Green from Glasurit 90 Line. The Espionage was also mentioned as a top show car in its class by Motor Trend, Car & Driver and Hot Rod magazines.

– Motor Trend Top Fords at SEMA – in addition to the Ringbrothers Espionage, the Petty’s Garage 2015 Ford Mustang featuring R-M Onyx HD Black and Petty Blue with White Diamond Pearl, and the 1966 Bronco painted by The Refinery by Adam Krause Inc. with Glasurit 90-Line Refinery Green and Refinery Brown, made the list of this year’s top Ford vehicles on display.

– SEMA Battle of the Builders – the 1965 Chevy Impala “Imposter” from Chip Foose featuring a Glasurit 90 Line custom Imposter Pearl Dark and Imposter Pearl Light, and the Ringbrothers Espionage were named a top three and a top ten finalist, respectively, for this competition that celebrates the best builds brought to SEMA.