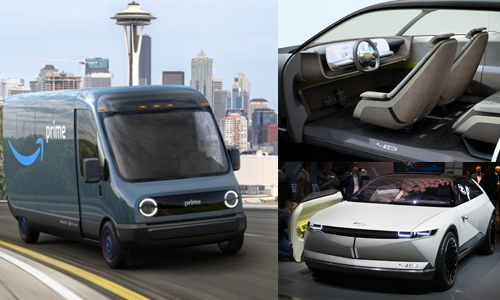 In the largest EV order to date, online retail giant Amazon has requested a whopping 100,000 electric vans from Rivian Automotive.

Rivian, a Michigan, U.S. based startup dedicated to emissions-free vehicles, received the hefty order recently and plans to have the first 10,000 vans shipped to Amazon by 2022. Rivian hopes to have the full fleet of 100,000 battery-powered delivery vans operational by 2024.

The vans will be based on the automaker’s R1 platform and employ the same battery and powertrain, the suspension, application software, and interior and exterior will all be designed to Amazon’s specs and be unique to the company’s fleet.

With the company seeking to meet its goal of becoming carbon-neutral by 2040, Amazon’s order echoes its recent efforts in environmental sustainability and climate impact.

Rivian also has plans to build and ship consumer vehicles, including an all-electric pickup truck and SUV it revealed late last year. The company hopes to begin customer delivery on these vehicles by 2020.

On September 2, Tory announced plans to test the autonomous shuttle that would connect a transit desert in the West Rouge to the neighbourhood’s local GO station. The two locations are only about two kilometres from each other, but the city hopes the route will satisfy a lack of transit options available to those living in the West Rouge.

The vehicles will likely seat eight to 12 people and be entirely electric. Tory soothed any anxious citizens’ nerves by confirming that the autonomous shuttle may not have a driver, but a TTC staff member will remain in the vehicle to supervise at all times.

Toronto is not the first city in Canada to pilot a driverless transit option — Montreal has piloted self-driving buses with speeds restricted to no more than 15 km/h.

Beaumont, Alta., just south of Edmonton, was the first city in Canada to set an autonomous shuttle in an environment that included vehicle and pedestrian traffic and regular traffic signals. The six-month pilot ends in October.

Details on the number of shuttles or a route have not been finalized, but consultations are scheduled to begin this fall.

Hyundai is channelling its iconic Pony Coupe Concept with a brand-new EV design, unveiled at the recent International Motor Show in Frankfurt, Germany.

The Hyundai 45, an electric vehicle concept, is designed to be an homage to the company’s heritage reimagined for the future.

The 45’s look is reminiscent of Hyundai’s classic Pony, but the automaker says the vehicle drew its inspiration from vintage 1920s aircrafts. It features a monocoque-style body and an aerodynamic light-weight design.

The EV’s name comes from the 45-degree angles at the front and rear, forming a diamond-shaped silhouette that is predicted to foreshadow the design direction of future Hyundai EV models. The company has strived to strip away complexity to celebrate the clean lines and minimalistic structures of the original Pony.