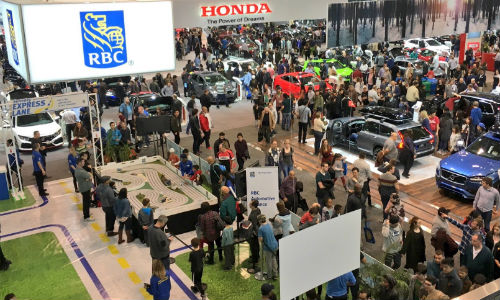 Toronto, Ontario — February 19, 2017 — It’s already a record-setting year for the 2017 Canadian International AutoShow. In addition to an unprecedented number of North American and Canadian debuts, the AutoShow officially opened to the public on Friday with a record-setting attendance of 20,218.

The Canadian International AutoShow takes place at the Metro Toronto Convention Centre from February 17 to 26.

“We’re pleased to see record-setting attendance for Opening Day,” says Jason Campbell, General Manager of the AutoShow. “We have a lot of high-profile vehicles, concepts, a Global unveil and many new features and exhibits, so there’s a lot of excitement around this year’s show.”

One new feature in 2017 is the ‘AutoShow Live’ Stage, hosting a variety of speakers and guests. Speakers will discuss a wide-range of important automotive topics daily throughout the week. Guests so far have included Continental Tire and race driver Alex Tagliani and Legendary Motorcar Company’s Peter Klutt, in addition to special appearances from LEGO Batman, Batgirl and Robin during an Ontario Provincial Police presentation.

All AutoShow Live stage events are livestreamed on Facebook at facebook.com/autoshowcanada.

“We’re excited to add a new component to the show this year that features some important speakers and topics that will appeal to a variety of audiences,” Campbell says.

The AutoShow Live stage continued at Sunday, starting at noon with a panel of leading automotive journalists debating the future importance of electric and autonomous cars here in Canada. The Ontario Provincial Police made a presentation on alcohol and impaired driving at 2 p.m., with journalists returning to the stage at 4 p.m. to discuss the best ways to deal with distracted driving.

Other AutoShow Live stage highlights happening this week include:

• The OPP will make a presentation on Family Day on vehicle safety related to car seat installation and seatbelt training for children.

• University of Waterloo is one of a number of Ontario universities conducting automobile research. They have a partnership with General Motors. In conversation with Norris McDonald, they discuss their work.

• Three-time Canadian driving champion and three-time Canadian Grand Prix Formula One starter Bill Brack talks with Norris McDonald about 50 Years of F1 Canada, what the sport was like in the old days and how it is today.

A full schedule for the AutoShow Live Stage is available in the daily calendar at autoshow.ca/features.