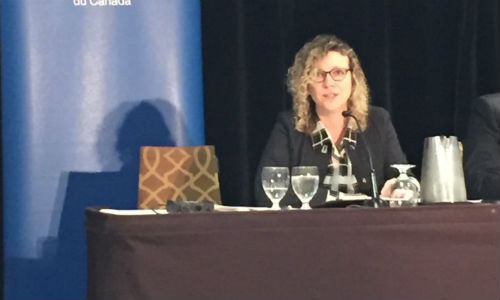 Toronto, Ontario — April 20, 2017 — The second day of Automated Vehicles 2017: Planning the Next Disruptive Technology focused on sorting the evolving ideas, opinions and predictions that began to fly on the first day at a more fine-grained level. The big themes were stretched out and pinned down. For more on the first day of the conference, please see “Minister Garneau at AV conference: ‘We need to be ready.‘”

Julia Markovich, Transportation Analyst with the Conference Board of Canada, described the advance of autonomous vehicles (AVs) as a new age.

The future seen at this conference is “post-car.” This doesn’t mean the end of cars, but the popular opinion at the conference seems to be that the old model of what constituted a car is quickly being eroded. The new world will be one of electric, self-driving cars that are accessed through a fleet model.

“We are actively moving away from that system of mobility that defined the post-war system,” said Markovich. “Active transportation [walking, biking, mult-model transportation] is being joined to AV-enabled infrastructure planning.”

Driving the shifts will be the “decline in the number of injuries and fatalities,” increased productivity due to freed up time, reduced congestion and “numerous commercial benefits.”

Many companies are working to make automated vehicles commercially available by 2020. If there was an overwhelming message to this conference it was, “To ensure a positive driverless future, we need to start planning now.”

What can we expect? One big prediction was that the fleets of self-driving vehicles will become one option in a book of available transport needs. In the future, individuals will buy access to multi-modal transportation. Bike shares will be joined with access to AVs, trains, light rail systems and subways.

As one conference attendee put it, “You need an SUV in the summer for camping. But why then spend nine months driving a big truck around the city for that one time you need it?” The new model: Order the type of vehicle you need at that moment. “Fit the use to the need,” as the attendee said.

There was also recognition that AVs could help solve “the last mile problem.” What do you do in suburbs when homes are spread far from the train station to downtown—you get the AV to step in, carpool, and then drop suburbanites off at their homes after the ride out of the downtown on the train.

“The promise is that we could delver on making trains a true option. We can scale up or sale down based on time of day and time of year. We could base the availability on densities in any area,” said another attendee.

At last year’s conference, Barrie Kirk of the Canadian Automated Vehicle Centre of Excellence (CAVCOE) said “there’s no such thing as a crashproof car.” While that may be the case, attendees at this conference certainly seem to think that there will be a significant reduction in collisions.

“They will eliminate 93 percents of collisions based on human error. Anyone who knows the number of people hit bay cars in this it city over the last year will know the importance of that,” said one attendee.

Antonio Gomez-Palladio of design and engineering firm DIALOG moderated on of the panels at the event. He has acted as the Chair of the Toronto Society of Architects, as well as the inaugural Chair of the City of Vaughn’s Design Review Panel.

“We’re going to figure out how to automate all the pieces of the distribution system,” he said. “And then we can ask, ‘does Wal-Mart need all that space for the parking lot?’ We’ll rethink our entire city. We need to start to think about all these chunks of land and systems that exist. Are we really going to need this amount of asphalt to do distribution? What else can we do with that land?”

Jaye Robinson is the City Councilor for Toronto’s Don Valley West ward and the Chair of the Public Works and Infrastructure Committee. She also sits on the City of Toronto executive committee. She spearheaded Toronto’s first-ever Vision Zero Road Safety Plan, a comprehensive, city-wide strategy to develop and deliver international road safety programs. She sees AVs as a part of the solution.

Last year Robinson pushed for a report on how the City of Toronto could prepare for the arrival and expansion of autonomous vehicle technology.

“We have to get on with this. The TTC has been conducting research. There are still too many unknowns to present a business case or strategic plan. It still seems early days. And there is not a lot of research out there. But Toronto learned its lesson about overlooking the disruptive effects new technologies when Uber came into use. That surprised many and overturned existing businesses. We weren’t ready for Uber. Council wasn’t proactive. The technology got in front of council. And we don’t want a repeat of that. It was difficult to figure out,” said Robinson. In response, Robinson has staff working on this issue.

Toronto is one of the first regions in the world with a dedicated staff member on this issue. “Staff are working on that file. It’s a three-year study for vehicle automation. Congestion and gridlock are the big challenges in this city now. We’ve got to work on that. John Tory is very passionate about this,” said Robinson.

Watch for more on the conference in Monday’s Autonomous Report.