Alex Humphries of Finixa on how constraints drive innovation 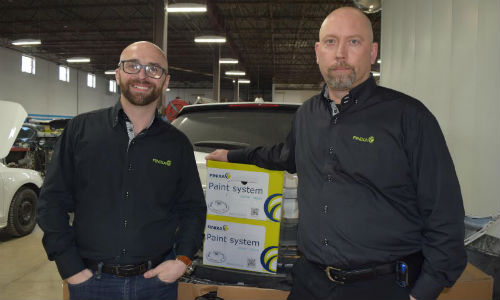 Toronto, Ontario — May 10, 2017 — According to Alex Humphries, Sales Manager at Finixa – Chemicar, there are some major differences between how the collision repair industry functions in Canada and how it works in Europe. Humphries’ work takes him to many different countries around the world and gives him a chance to regularly meet with repair professionals. In a recent interview with Collision Repair magazine, Humphries gave us his insights into the similarities, the differences and his views on training and technology.

Humphries notes that the industry as a whole in North America may lag behind Europe, but that the top performers aren’t behind at all.

“I think it’s a fallacy to say that Canada and the US are 10 years behind Europe, maybe three to four years ago, but not now. If you took the average of all the bodyshops in Canada and looked at their processes and how they do things then yes, they’re behind the average in Europe,” says Humphries. “But if you took the top 15 percent of those bodyshops, the ones who are really on the money, then they’re not behind at all. It’s about how we can get the rest to fall in line with that top 15 percent.”

Humphries outlines how European shops have innovated and why it became a necessity.

“I absolutely believe that Europe has improved in its collision repair industry. We’ve really embraced the process, and it’s all about constraints,” he says. “When constraints are put on a collision repair business, they have to go outside of their comfort zone. From there, they have to find new ways of doing things, discovering things, embracing new technology and new ways of thinking. It’s happening in Canada as well. Some shops are falling by the wayside, but those who are embracing innovation are succeeding to a massive degree.”

Humphries credits innovation and a willingness to do things differently as key elements in Finixa’s success.

“Finixa is about innovation and forward movement,” says Humphries. “You may not hear this much, but I think one of the most important decisions a company can make is to decide what not to invest in. I’ve witnessed bodyshop owners throwing huge amounts of investment into technology just to realise afterwards it has all been trying to fit square pegs in round holes, and learning that not one single investment in a piece of technology is going to change their whole business. We don’t manufacture paints. The moment we manufacture paints, we lose relationships and product development contracts with the paint brands, because we’ve become a threat. Because we don’t sell paint, the paint companies can pull us in before their products go to market, and ask us to develop non-paint goods to help sell the product.”

Efficiency in terms of both margins and sheer production are both very important in the UK, according to Humphries.

“National studies in the UK show the average insurance company invoice is about £1,200 pounds per repair, and just over 16 hours labour,” says Humphries. That’s about $2,130 CAD. “The average net profit, however, is less than 3 percent. Every square inch of the shop has to be productive space. About 10 years ago, the average larger size shop in the UK was between 20,000 and 40,000 sq. ft., and doing about 40 to 50 cars a week. Now there are shops in the UK that are 4,000 sq. ft. or less, and they’re knocking out over 60 cars a week with 50 percent less operatives. That‘s how efficient the industry has been forced to become. Which goes to show, that if you put a bodyshop under constraint, if they invest in the right technology, people and systems/processes and they really can over achieve in an ever increasingly difficult market!”