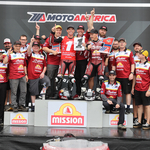 MINNEAPOLIS–(BUSINESS WIRE)–This past weekend at New Jersey Motorsports Park, Tyler O’Hara battled through rain-soaked conditions to finish second in the Main Event, earning the necessary points to capture the 2022 Mission King of the Baggers (KOTB) Championship for Indian Motorcycle Racing and S&S® Cycle. This is the second KOTB Championship in three years for O’Hara and the Indian Motorcycle Racing-S&S team in the increasingly popular MotoAmerican bagger-racing class. 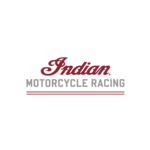 O’Hara’s 2022 Championship run was a picture of consistency throughout the seven-round series. The Petaluma, Calif. native captured five podium finishes over seven rounds; including a victory at the Daytona Speedway season opener, along with two fourth-place finishes aboard his ever-reliable Mission® Foods S&S® Indian Challenger. This year’s Championship came at the expense of Harley-Davidson Screaming Eagle rider Travis Wyman, who entered the series’ final round with a three-point lead in the Championship point race, only to see his hopes literally slip away when he crashed midway through the second lap while frantically chasing O’Hara through the rain soaked circuit in New Jersey.

It was an afternoon rainstorm that spoiled the best-laid plans for points leader Wyman and served up a golden opportunity for O’Hara and teammate Jeremy McWilliams, who both thrive in wet conditions. Starting from the fourth and fifth positions respectively, O’Hara and McWilliams jumped out to a fast start, overtaking Wyman and Vance-Hines Harley Davidson rider James Rispoli and moving into second and third position respectively coming out of turn one. This allowed McWilliams to slow the pace for the field behind him, including Wyman, and create breathing room for O’Hara who consistently maintained pace behind race leader Kyle Wyman. With an added level of urgency thanks to McWilliams’ stifling efforts, the younger Wyman made an aggressive outside pass on McWilliams and immediately began aggressively pushing to close the gap with O’Hara, ultimately low-siding and sliding into the infield late into the second lap. Although he was able to get back on his bike and continue the race, Wyman fell to the back of the pack, while O’Hara stayed close behind the older Wyman brother, holding his second-place position to the finish and capturing his second KOTB Championship.

“Even though it’s one rider that earns the Championship, this was a situation where the support from Jeremy and our ability to work together made all the difference, and I could not be more grateful for his support and the tireless work of my entire Indian Motorcycle-S&S team,” said O’Hara. “Every member of this team sacrificed so much of themselves over this past year and to stand on that podium and celebrate this Championship with them is a testament to our commitment and nothing short of a dream come true. I’m so proud to reclaim the crown and the number-one plate for such an incredible and talented group of guys who put their hearts and souls into this season.”

McWilliams, a veteran road racer of Moto GP fame, joined the Indian Motorcycle-S&S factory team at the start of the 2022 season. Along with a virtually unmatched level of experience and skill that resulted in a Round Two victory at Daytona and fourth-place finish overall, McWilliams brought an invaluable wealth of knowledge to the team. His technical input and collaboration with Indian Motorcycle-S&S engineers and mechanics throughout the season allowed the team to continually evolve, refine and improve the Indian Challenger, optimizing set ups specific to track conditions at each and every round.

“Jeremy’s expertise and experience, combined with Tyler’s skill and competitive fire is something truly special,” said Gary Gray, Vice President Racing, Service and Technology for Indian Motorcycle. “When you back those two guys up with the expertise, commitment and heart of this entire Indian Motorcycle-S&S crew, you come away with a Championship. On behalf of everyone at Indian Motorcycle, I could not be prouder of our team and what we’ve accomplished this season.”

Ultimately, it’s the commitment of the entire team, including the engineers and mechanics behind the riders, that makes the difference between winning or losing a championship. This was no better evidenced then by the consistency of O’Hara and his Mission® Foods S&S® Indian Challenger throughout the entire season. Not only did O’Hara’s #29 bike finish every race during the season without fail, it never finished lower than fourth place.

“This Championship is the result of the sacrifices and commitment made by each and every member of our team – so many days on the road away from their families and sleepless nights working to ensure our bikes were dialed-in for Tyler and Jeremy,” said Jeff Bailey, S&S Cycle Crew Chief. “Every member of our crew played a critical role, making unique sacrifices and sharing in the highs and lows we experienced together throughout the season, and that’s truly what makes this Championship so gratifying. I could not be prouder of this group of incredible individuals.”

Indian Motorcycle is America’s First Motorcycle Company®. Founded in 1901, Indian Motorcycle has won the hearts of motorcyclists around the world and earned distinction as one of America’s most legendary and iconic brands through unrivaled racing dominance, engineering prowess and countless innovations and industry firsts. Today that heritage and passion is reignited under new brand stewardship. To learn more, please visit www.indianmotorcycle.com.

S&S® Cycle was born from a passion for racing and has spent over six decades building performance for the powersports market. Their unwavering focus on quality, reliability and top shelf power has made S&S® Cycle the absolute leader in high performance on the street and track.

MISSION®, owned by GRUMA, S.A.B. de C.V., is the world’s leading brand for tortillas and wraps. MISSION® is also globally renowned for flatbreads, dips, salsas and Mexican food products. With presence in over 112 countries MISSION® products are suited to the lifestyles and the local tastes of each country. With innovation and customer needs in mind, MISSION® focuses on the highest quality, authentic flavors, and providing healthy options that families and friends can enjoy together. For more information, please visit www.missionfoods.com