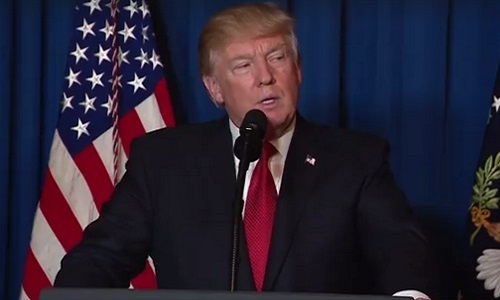 Toronto, Ontario — June 5, 2018 — In this week’s Tuesday Ticker, Trump’s terrifying tariffs and much, much more.

The global market for the two basic auto body materials, steel and aluminum, is undergoing a profound bit of volatility. Trump’s imposition of new tariffs on the two most important automotive materials, which have been placed on Canada, the EU and Mexico, has taken much of the world by surprise.

Flavio Volpe, head of the Automotive Parts Manufacturers Association, did not hold back when an out-of-nowhere imposition of a 25% duty on aluminum came into effect this past week. “I expect Canada, Mexico and the Europeans to respond by punching the bully in the nose. Probably more importantly, I expect major consumers of steel in the U.S. to respond in American courts,” said Volpe in a tweet.

Volpe’s prediction was very quickly proven correct. Politicians and government lobbyists have expressed a level of outrage rarely witnessed at the national level, and the diplomatic situation between Canada and the United States has reached its lowest point in decades. Since the announcement, Prime Minister Justin Trudeau and Foreign Affairs Minister Chrystia Freeland have both been making strongly worded statements on American media outlets, describing the tariffs as an ‘insult.’ The Canadian Government has also described the news as being against World Trade Organization rules, and announced a dollar-for-dollar reprisal. The E.U. and Mexico have also announced that they will take a similar stand.

The Trump administration used an obscure bit of law in the U.S. Trade Expansion Act to assert the tariffs. The administration had to claim Canadian steel poses a national security threat to use that bit of law. That the Trump administration is carrying out its foreign policy this way does not bode well for a resolution of these issues. It will be interesting to see if the trend toward the adoption of aluminum into auto bodies will slow.

The U.S. Chamber of Commerce, as solidly a Republican an institution as there is, urged the administration to not to proceed with the tariffs. Despite the fact that the U.S. stock market saw a precipitous decline in the hours following Canada’s planned trade reprisals, the news has not been entirely negative for the President. Trump can be said to be delivering on his election promise to bring jobs back to the American Midwest. U.S. steel prices are already almost 50 percent higher than they were when he came into office. The new tariffs are creating new confidence in the U.S. steel industry.

Major producer, U.S. Steel, has announced plans to restart one of two blast furnaces and rehire workers. India’s JSW Steel will invest $500 million in an existing plant in Texas and will build a new one. Arkansas-based Big River Steel is also said to be considering a $1.5 billion expansion of its facilities.

Here in Canada, “By invitation only, 100 industry leaders from Canada, the United States, Europe and Japan are in Montreal to come up with a road map to deal with the issue of over-capacity in the world aluminum market.” The Aluminium Association of Canada is organizing the event. That group represents three of Canada’s big players, Alcoa, Alouette and Rio Tinto. According to a media report, the aluminum summit will send its findings to the G7 leaders who are meeting in the Quebec town of LaMalbaie June 8 and 9

Save the Date for Uni-Select Investor Day in Montréal. Uni-Select Inc. invites financial analysts and institutional investors to attend an Investor Day to be held in Montreal on September 26 and 27, 2018. The event will be hosted by president and CEO Henry Buckley and other members of the executive team. Publicly traded companies use these events to publicize positive events at a corporation. Analysts have a chance to sit down with management and get a sense of what’s happening at a company at a more detailed level.

In the case of the Uni-Select, the event will start with a dinner on September 26, hosted by the executive team. The following day will see meetings that focus on the Canadian Automotive Group and will, “… include a look at the Canadian strategy and site visits to both a company-owned and an independently-owned Bumper To Bumper store.” The company will also provide an update on its FinishMaster US and The Parts Alliance UK business units according to a press release. The timing of the meeting makes sense. Uni-Select has been busy over the past couple of years. The company has grown in several different ways. Analysts are likely due for an update as to events at the company of late.

The Boucherville, Quebec-based organization is now a leader in the distribution of automotive refinish and industrial paint and related products in North America. It is also a leader in the automotive aftermarket parts business in Canada and in the UK. The company’s shares are now traded on the Toronto Stock Exchange under the symbol UNS. In Canada, Uni-Select deals with over 16,000 automotive repair and collision repair shops. This support to the industry is offered through a growing national network of more than 1,100 independent jobbers and over 60 company-owned stores. Uni-Select has recently reorganized its coporate-owned stores under three brands, Bumper to Bumper, Auto Parts Plus and Finishmaster. In the U.S. Uni-Select operates through a single wholly-owned subsidiary, FinishMaster Inc., which operates a national network of over 200 automotive refinish company-owned stores that service a network of over 30,000 customers annually. According to the company Uni-Select is now the primary supplier to over 6,800 collision repair centre customers.

There has also been an expansion into Europe of late. In the UK and Ireland, Uni-Select, operates through its Parts Alliance group of subsidiaries, and is now leading distributor of automotive parts to over 23,000 customer accounts through a network of close to 200 locations including over 170 company-owned stores. Uni-Select has grown rapidly over the past several years. It’s likely timme to update the investment industry on the latest changes, hence the investor day.

The phrase “Like, Kind and Quality” is an old one used to describe refurbished and reclaimed parts, and the source of auto recycler LKQ’s name. It appears that the market, while perhaps unfamiliar with the meaning behind the initials, has rewarded the sentiment, as LKQ is now largest publicly traded auto recycler.

At a recent hosted an investor day event, which was designed to show off the growing European side of LKQ’s operations, analyst Ryan Merkel of William Blair brokerage took some notes from a brochure that was distributed. The analysts who attended the LKQ investor day in Tamworth, England came away encouraged by the potential in the European business.

According to Merkel a new facility in Europe is state-of-the art and is expected to lift Europe margins by 100-150 basis points as it comes online. On the negative side, according to Merkel, “Europe integration sounds complex and could be bumpy.” He goes on to say that, today, Europe is run as five “separate islands,” and management said there is “trapped capital” as a result.

According Merkel’s report, “We prefer that LKQ improves its global operations before entering new markets in Europe, China, or India… [Return On Invested Capital] and free cash flow have disappointed recently, and we believe improving these metrics should be the primary focus (versus M&A). The most recent European acquisition is a company in the Czech Republic known as Stahlgruber.

Merkel goes on to say that, ” LKQ is a dominant market leader with significant runway for long-term growth. However, execution has been a lingering issue and is currently a show-me story.” Merkel estimates that if LKQ restores margins to earlier levels a bull-case scenario for 2019 could see earnings of $1.57 billion sending shares to $38 over the next twelve months. We continue to believe management should slow growth investment and deliver margin expansion and free cash. LKQ has been a successful rollup, but now needs to prove it can integrate and run a complex global business for higher margins and ROIC,” according to Merkel’s report. “Our 2018 and 2019 adjusted [earnings-per-share estimates] are $2.29 and $2.56, respectively… We assume global organic growth for parts/services up 4.7% in 2018 and 4.8% in 2019.” “Our conclusion is that LKQ has a clear path to double-digit [earnings] growth and higher margins. We liked management’s message of optimizing operations, improving margins, adapting to changing vehicle technology, stabilizing working capital as a percent of sales, and growing the customer offering to include loyalty-creating services (e.g., CRM system for garages).” There is some work to be done yet. According to Merkel, “Europe integration will be a challenge, in our view.

There are currently no common processes or functions across the diverse businesses. Fortunately, LKQ does have deep experience integrating businesses and is adding management talent to improve the process further. LKQ plans to hire a [chief operations officer] for Europe and has already hired a global [chief information officer] to help drive integration.”

According to Merkel, LKQ plans to enter China over the next five years, but will make small bets initially. LKQ also hired an innovation team to help the company adapt to automotive technology changes. “We think this is an area where LKQ can outperform smaller competitors,” says Merkel. At $32, shares in LKQ are currently trading at 11.2 times earnings, which is in line with auto retailers. But Merkel thinks LKQ should trade at a premium to auto retailers.