When faced with conflict, we often have two choices: crumple like a bumper on concrete, or hold firm with integrity. For Stephen Jainarine, owner of Whitby, Ontario’s Lakeridge Collision, giving up was never an option.

Hailing from the Caribbean, Stephen arrived in Canada at 15-years-old. He finished high school in a suburb of Toronto and started working at local collision centres shortly after. “I started to help in the afternoons,” said Stephen. “I was very vocal about being involved in the repair process, so the team showed me how to do things.”

In 1986, Stephen married his wife Sherry and the pair bought their first home in Oshawa, Ontario. Hit by a recession not long after, Stephen secured a job at Toronto’s Crangle’s Collision in 1988, commuting a casual hour down the ON-401 highway. But a hunger for a business to call his own would soon push the future businessman to greater heights.

“We decided to dive right in. I started my own shop in Oshawa while still working daily at Crangle’s,” said Stephen. “We began by partnering with local dealerships and completing repairs for them.” Stephen admits he could never have done it alone; Sherry was a driving force in those early days.

“I was eight months pregnant and still prepping cars!” she said proudly.

It wasn’t until 1992 that Stephen decided to pack it in at Crangle’s and put his all into Durham Top Quality Auto Collision. He added a towing department that same year and business quickly took a turn for the busier. 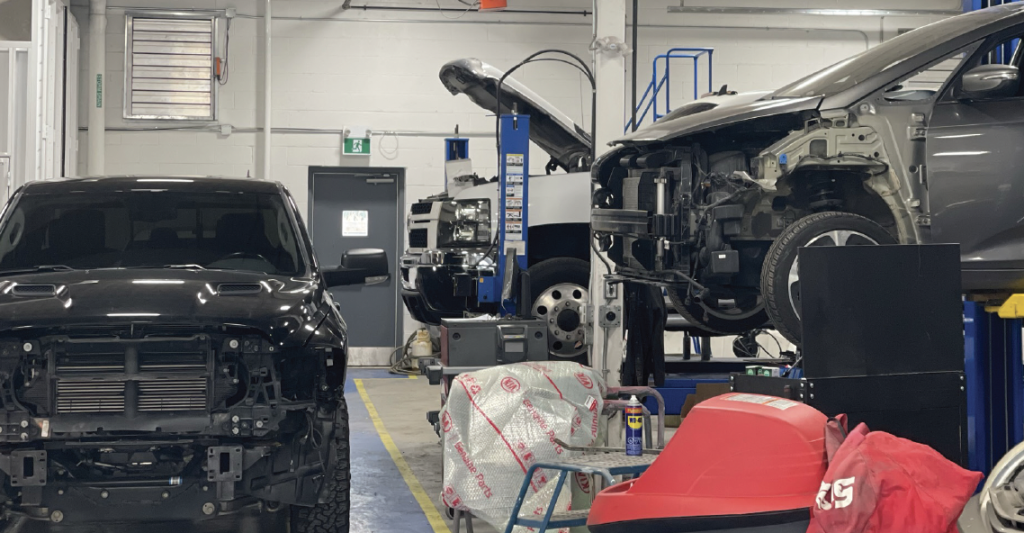 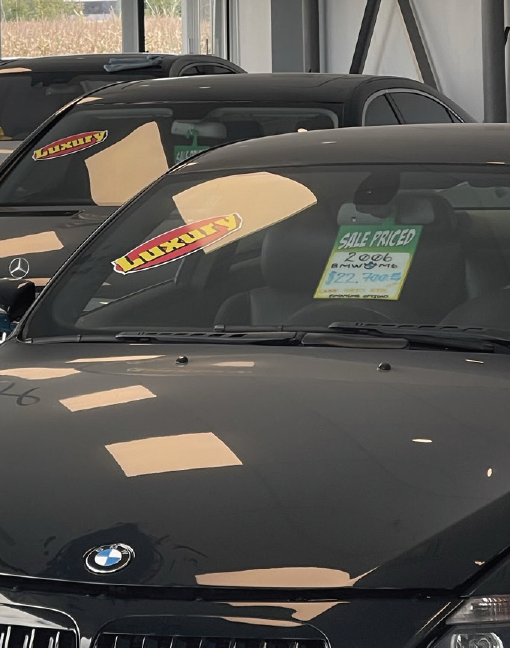 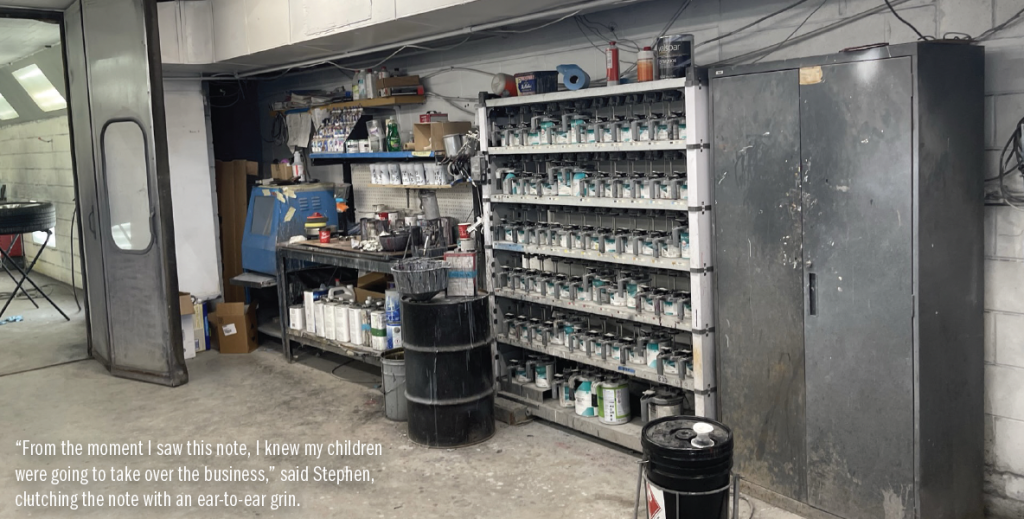 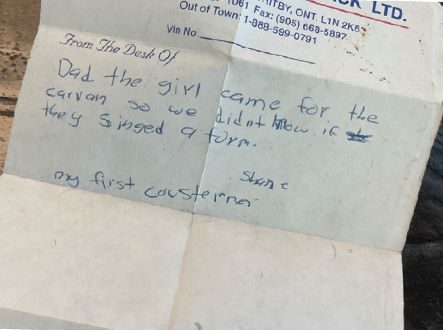 Eight years later, Stephen put an offer in to purchase the nearby Lakeridge Collision. After much deliberation, the deal was finalized in 2002. He went on to run both businesses simultaneously for seven years before closing the Oshawa location to amalgamate the two facilities. “The intention was to rebuild and make the building bigger to accommodate all elements of the business,” said Stephen. “We wanted our towing compound, the collision centre and our dealership space all on one lot.”

In 2013, Stephen brought his blueprint forward to the city—but the municipality had plans of its own. With Lakeridge Collision carefully situated on the borders of two cities— Ajax and Whitby—the municipality fought hard for the bodyshop to simply disappear without a trace.

“When I first applied for my building permit, they tried to give me a hard time. They said they didn’t want a bodyshop right on the border and that their aim was to get rid of it. I ended up hiring a lawyer and had multiple meetings with the towns. Eventually, they granted us permission to go ahead and build, but only if we bent a little bit.

“The municipalities didn’t have a choice. This bodyshop had been here since the ’70s, doing the exact same work. Their argument did not make sense.”

Even still, the hurdles did not stop for Stephen. With a new 401 interchange in the works a mere kilometre from Lakeridge Collision, the city had planned road construction for the intersection just outside Stephen’s door. They wanted to extend a one-lane road to a two-lane way, forcing Stephen to give up some of his own land in exchange for his construction approvals. “We needed the development to happen to give us that prestigious edge,” said Stephen. “I had to give up some land and they didn’t give me anything for it, other than our permit approvals.” Finally, in 2017, Stephen and the team were raring to go on building improvements. However, they were once again met with a chorus of ‘not yet’s. 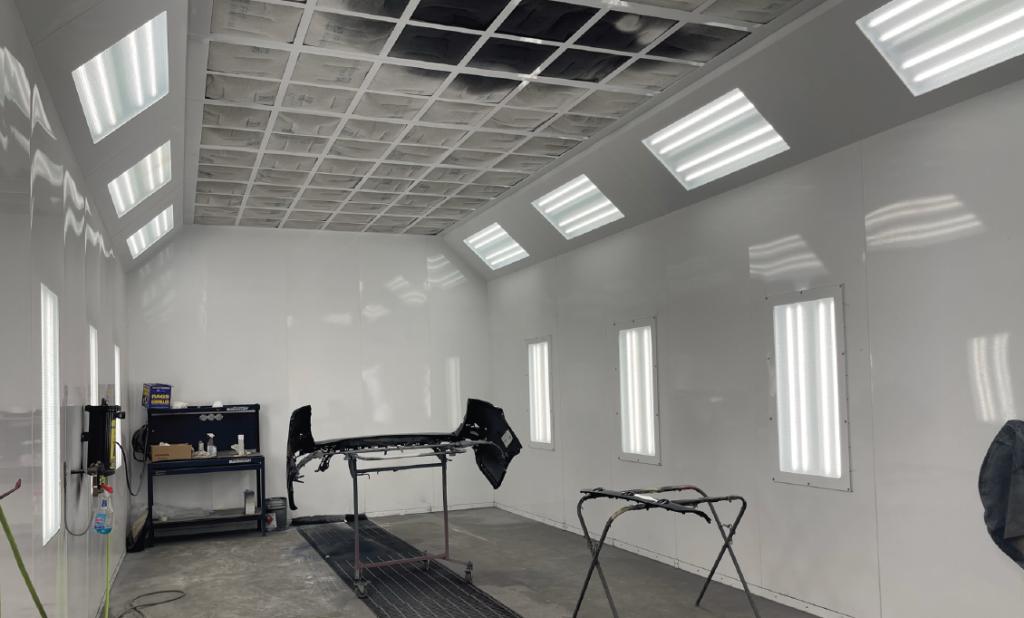 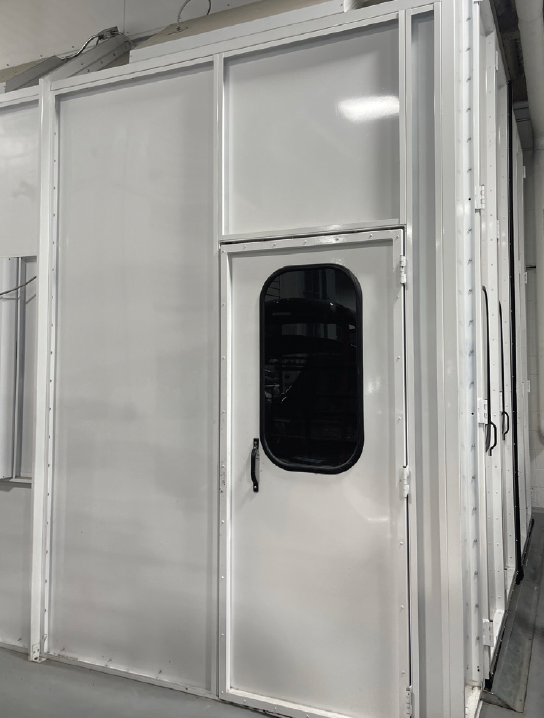 “They said, ‘Well, you can’t build now because they’re building the bridge over the highway just a kilometre from here,” he said. “That was on the federal side, this time. We were told it would be a further two years on hold from that point.” To say frustrations had hit the roof would be an understatement. By now, they had cleared the heavens.

“We had already spent tremendous amounts before the shovel was even near the ground. We were forced to present three different designs to the town because they wanted their two cents on it.”

Because of the business’s unique location, the city of Whitby had plenty to say on the outer facade of Lakeridge Collision. “People travelling into Whitby from Ajax and vice-versa need to feel welcomed, they said. They really didn’t care what it was costing us; they just wanted it done their way.” No matter the challenges faced, Stephen remained both positive and patient throughout the six-year waiting game—which paid off tenfold, he says.

“At the time I purchased this location, I truly had no idea things were going to develop like this. It was a lot to deal with, the six-year waiting game, but we’ve been left with an amazing and modern facility, as well as some fantastic clientele.” And the location could not be more perfect, he said.

“Our clientele is huge, so we do get a lot of referrals through there. But, with our location and being so close to the 401, we have a lot of customers that just walk in off the road—about 10 to 15 customers per week. We’re clearly visible and you can’t miss that we’re a collision centre.” With renovations finally complete, Stephen can’t wait to add more wow-factor elements to the business—both in the repair bay and on the outer facade.

“We’re putting up some brand new signage in 2022,” he said. “It’s all going to have a digital LED display; we’ll write out daily specials on there and put up a nice ‘Welcome to Whitby’ sign at the top.”

Even after all his hard work in renovating the business, Stephen has no plans to slow down. The dedicated businessowner says he thrives on being busy and work is just another place he calls home.

“My staff are an extension of my family, just because they’ve been here for so long,” he told Collision Repair. “Two of the men on the floor—Sam and Mr. Yan—have been here since our early days, in the ‘90s. They arrive here at 5 a.m. every morning; it could be the worst snowstorm of the year and I can still count on them to be here.”

That’s not to say Stephen hasn’t faced his own obstacles in hiring new team members. While he always makes a point to have an apprentice on staff—acquired through the facility’s partnerships with Durham College and Centennial College—Stephen has also been forced to step in when the team is short on people—but it’s nothing the seasoned repairer can’t handle. “I’m not just a businessowner—I’m a body person; I’m a mechanic; I’m a painter. But, above all else, I love to teach my skills and pass them down to the younger generation. Every job today seems to be ‘replace, replace, replace,’ but when I started we would fix everything. I love teaching those skills to the apprentices that come through our doors.”

As for the future, both Stephen and Sherry look forward to handing the reigns over to their children.

“I feel so much pride seeing my sons work in the business,” beamed Stephen, with Sherry smiling behind him. “My proudest moment came many, many years ago when my son handled his first customer. My son Stefan left this note for me after a customer had come by and I wasn’t around, so he took matters into his own hands.”

“From the moment I saw this note, I knew my children were going to take over the business,” said Stephen, clutching the note with an ear-to-ear grin.

The couple also has plans for their infant grandson, Kayden, to join the ‘biz someday. “I just can’t wait to see my grandson in here, walking around and trying to help wherever he can,” said Sherry.