The Autonomous Report: GM may partner with Google, Volvo releases ‘Pilot Assist’ and a look at where expertise lives 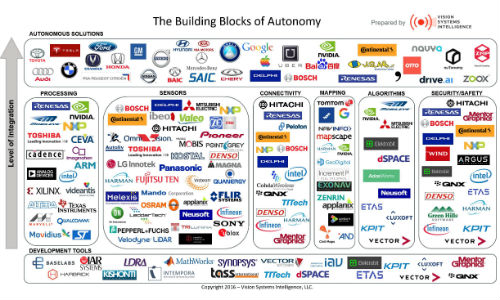 Toronto, Ontario — June 19, 2016 — The autonomous vehicle space continued to generate a lot of news across the world in the last week, including new developments from Volvo, the possibility of new partnerships between Google and automakers and a chart showing where expertise in the various aspects of autonomous vehicles (AVs) resides.

– Volvo has recently released a feature called “Pilot Assist”, which takes over some—but not all—of the driving. The Society of Automotive Engineers (SAE) uses a scale to rank automated vehicles, ranging from Level 0 (no automation) to Level 5 (full automation). On the the SAE scale, Volvo’s Pilo Assist qualifies as Level 2 (partial automation). This ranks it above Level 1 (driver assist). Volvo is also starting a program called DriveMe next year that will see the automaker give Level 4 autonomous cars to 100 test vehicles in Sweden and China.

– The Netherlands has announced a European Truck Platooning Challenge in 2016. One of the big advantages of autonomous vehicles (AVs) would be that trucks can platoon, that is, multiple heavy trucks can essentially operate a single unit. Not only could a single driver control the platoon, by doing this the trucks greatly reduce drag and save massive amounts of fuel. Six makers of automated trucks—DAF Trucks, Daimler Trucks, Iveco, MAN Truck and Bus, Scania and Volvo Group—have been platooning on public roads from several European cities to the Netherlands.

– The ongoing discussion about AVs includes a philosophical problem: What will an autonomous vehicle do in a situation where it is forced to decide if the car should drive off a cliff to save a busload of young children? Should AVs be designed to “kill the owner” in such an instance? According to a story in Wired the way around this problem is the use of artificial intelligence. According to the report, “autonomous vehicles that will make decisions using ‘deep neural network’ and other forms of machine learning. These cars will learn—to identify objects, recognize situations, and respond—by analyzing vast amounts of data, including what other cars have experienced in the past … Autonomous vehicles will very quickly have seen more, and experienced more, than any human driver possibly could. And unlike most human drivers, they will deliberately comb through that experience for lessons and apply them consistently,” according to the article. “Autonomous vehicles will be covered in sensors and will be in constant communication with other vehicles. Unlike human drivers, they will have 360-degree awareness at all times. And they will never fail to heed anything, forget anything, or become distracted by anything.” As a result, “autonomous vehicles are likely to be far better moral decision-makers than human beings, not because they’re programmed with some true and correct set of moral principles, but because they’re highly sensitive, focused, and consistent.

They will eventually be capable of judgments based on a sensitivity to empirical detail and an assessment of probabilities that no software engineer could anticipate in advance or replicate even after the fact.” That is, the way self-driving cars “will be made more ethical is the same way they’ll be made more safe, efficient, and effective: by improving their sensors, communications, and learning [through AI].”

– General Motors said Tuesday “it’s ready and willing to work with Alphabet’s Google to develop self-driving car technology.” It has been reported lately that Google has been developing a self-driving version of a Chrysler minivan with Fiat Chrysler Automobiles. But apparently Google has also said “it’s open to more partners.” Mark Reuss, GM’s Executive VP of Global Product Development, was quoted by Bloomberg as saying, “We’re absolutely open and willing to do that.” GM CEO Mary Barra was quoted as saying that GM is “taking proactive measures to maintain its lead in US auto sales, whether it’s connectivity, whether it’s autonomous, whether it’s electrification.”

– Also reported this week is the interesting idea that Tesla “collects a million miles worth of data every 10 hours.” The data comes from its vehicle fleet and allows the company to fine-tune its self-driving software. Billionaire investor Ron Baron told CNBC this week that “Tesla could become one of the largest companies in the US and the world … ‘The competition is not anywhere. They could have caught him four or five years ago. But they can’t catch him now. He [Tesla founder Elon Musk] is too far ahead.'”

– A company called Vision Systems Intelligence has posited the idea that no single company has all the expertise needed for AVs. The company has also produced an infographic that shows which company has expertise in a particular apsect. You can see the full size version at this link.

According to a statement, “Vehicle automation for the passenger car segment is a multidisciplinary field of perception, processing, machine learning, motion planning, connectivity, and more. The value chain includes hundreds of companies and thousands of products ranging from components, modules, or systems, to complete vehicles. The composition of companies ranges from the tech heavyweights to robotics-related start-ups, to traditional automotive and their tier-one suppliers.”

“No one company owns all the expertise necessary to build an autonomous vehicle. From low-level component suppliers to modules or systems, each domain is a highly complex field in itself,” says Phil Magney, founder of Vision Systems Intelligence.

Building an autonomous vehicle requires so many disciplines that many companies have no choice but to source intellectual property from numerous players. In some cases, what was once positioned for advanced driver assistance systems (ADAS) is now being positioned for autonomy.

“This is how the tier-one suppliers are generally approaching it. However, going from Level 1 applications to Level 3 or 4 is a huge leap,” says Magney. “Tier-ones have a unique position in the value chain because they represent the mechatronics side of automation where the mechanical world meets the digital world.”