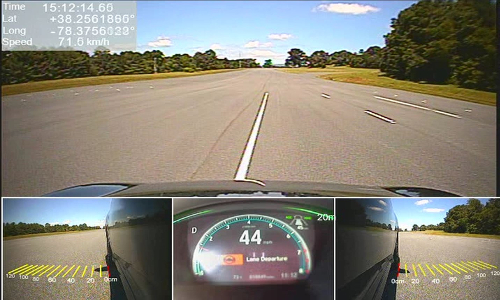 Toronto, Ontario — October 19, 2017 — We all know that repair costs have risen. We also know why. The simple fact of the matter is that modern cars are much more complicated than in years past. The manufacturers have introduced new materials, and ultra-high strength steels are now commonplace. Also, electronics and sensor systems have continued to proliferate. All of this means a higher cost of repair when it goes wrong.

Replacing a windshield used to be a relatively simple procedure. That time is behind us. Today, this once-simple procedure must take into account the many different advanced driver assistance systems (ADAS) that rely on the windshield’s position and integrity. The windshield itself may be loaded with sensors or displays and include camera mounting brackets. These will also impact the repair procedure.

Just given that, we’re probably looking at 50 percent of the total North American fleet having some kind of forward collision warning (FCW) or AEB systems by no later than 2027. Other factors could speed up the timeline.

Already, we’re seeing some OEMs insist on OEM replacement windshields to ensure that any of the FCW, AEB or lane departure warning (LDW) technology is working as intended. The OEMs require that the ADAS systems be calibrated after windshields are installed.

The Insurance Institute for Highway Safety (IIHS) has conducted some research tests to explore the necessity of these requirements for vehicles equipped with LDW and AEB.

“Our research highlights the need to make sure that windshields with ADAS sensors and cameras are properly calibrated whenever they are replaced, whether they are OEM or aftermarket,” says Sean O’Malley, Senior Test Coordinator at IIHS. “What we found seems to confirm what many OEM sources have been saying: These instruments should be calibrated or they simply won’t work as intended.”

IIHS technicians examined OEM and aftermarket replacement windshields on some late model Honda Civics. One issue technicians noted was a misaligned camera mounting bracket on an aftermarket windshield. The camera’s mounting was just one degree different from the OEM mounting, but it affected the car’s AEB and LDW performance.

IIHS ran numerous tests with the camera rotated to various positions in the mount. In the case of the AEB system, a misaligned camera caused the car to apply the brakes later than it normally would have. With LDW, technicians noted false readings, leading to too-early or too-late warnings. Although such miscalibrations may not directly cause a crash, they could reduce the potential benefits of crash avoidance technologies.

The once-simple procedure of replacing a windshield is now quite complicated and requires enormous precision. IIHS has surveyed a number of dealer service centres and found that 75 percent of those centres that received calibration requests were due to windshield installation issues.

Glass is frequently a sublet for collision repair facilities, but relying on the dealership may not get the job done properly. Some dealerships aren’t equipped to do the work.

O’Malley asked one dealer to calibrate an ADAS system after windshield installation, and they referred him to another dealership that was about 70 miles away. That’s a bit of a hike to flatbed a customer’s car, especially if they want it for this weekend!

In another case, dealership technicians weren’t up to speed on calibration procedures and had trouble calibrating a Civic until IIHS reiterated Honda’s procedure to them.

“We asked them to please follow the entire Honda procedure, skipping no steps. Guess what? It calibrated after all. It turns out they were leaving out some steps,” O’Malley says.

Approximately two-thirds of comprehensive auto claims involve glass work. Looked at in dollars, almost 14 percent of the bill goes toward glass. This is increasing due to windshield replacement costs and the costs of needed calibrations.

IIHS research has shown that both camera mounting and mounting geometry can affect the performance of ADAS systems. As repair shops begin to see more of these windshields, it is important that they pay careful attention to calibration to make sure ADAS systems function correctly.