After hosting its 2020 event online, the SEMA Show went off without a hitch at the Las Vegas Convention Centre last November. Most attendees hadn’t physically been on a trade show floor for nearly two years, and the air was thick with palpable excitement.

Regulations were lifting, vaccines were lifting their loads. If you had asked the average member of the Canadian aftermarket last November whether they planned to attend industry events in 2022, there was a significant likelihood that they’d think to consider it. The Canadian Collision Industry Forum had planned to host a Toronto event in February; the trifecta of Toronto, Montreal and Vancouver Canadian International AutoShows had plans to return in full force. But all were forced to cancel their events. Webinar sessions returned in droves. Governments imposed regulations we thought we’d bid adieu to. All thanks to the dreaded O-word.

In the wake of a COVID regulation resurgence, many are frustrated. It’s been almost two years of no trade shows, forums or open conversations on a physical stage. Few find a back-and-forth Teams text chat as captivating as a booming voice on a stage.

IT’S BEEN ALMOST TWO YEARS OF NO TRADE SHOWS, FORUMS OR OPEN CONVERSATIONS ON A PHYSICAL STAGE. 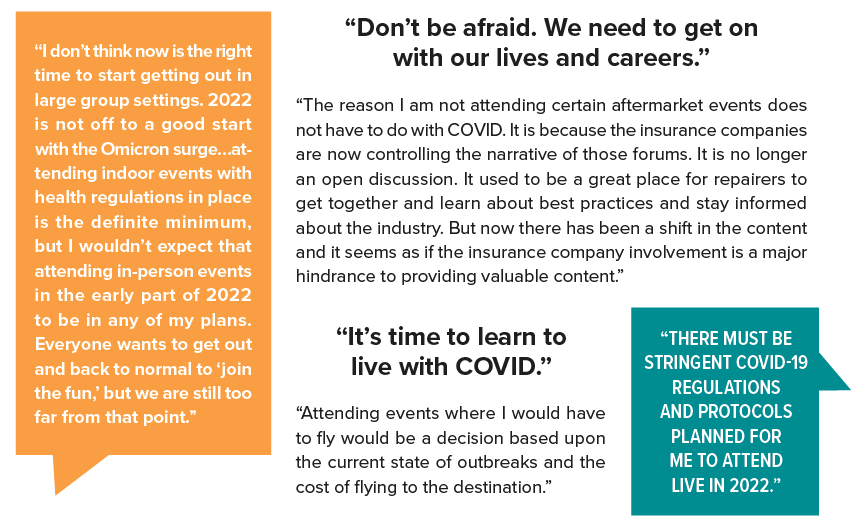