Toronto, Ontario — A new study from J.D. Power has found that despite the large amounts of money being poured into customer-facing websites and mobile apps by insurance companies, customer satisfaction with digital shopping is on the decline. The 2022 U.S. Insurance Digital Experience Study found that customer satisfaction fell 16 points from last year, […]

Toronto, Ontario — For putting the phrase “as good as new” into real practice, the J.D. Power 2022 Canada ALG Residual Value Awards have recognized the Subaru Crosstrek and WRX for being at the top of their respective segments in regards to residual value. The award is aimed at recognizing vehicles that retain their value […]

Dang Doohickeys: J.D Power reports most on-board car tech not used by consumers, 51 percent have ‘no need’ for technology

Toronto, Ontario — We’ve all looked at a complex piece of technology and thought, “I’ll get around to setting that up one day,” but do we ever? According to a new study from J.D. Power, the answer, when it comes to new features in vehicles, is typically never. The influx of on-board features like more […]

Cambridge, Ontario — Toyota Motor Manufacturing Canada Inc. has come away with the J.D. Power Plant Quality Award this year, recognizing TMMC’s South Plant in Cambridge, Ont. as one of the top facilities in the world. “Today’s award is a testament to our Team Members, their talent and the quality of work added to each […]

Toronto, Ontario — A new study from J.D. Power shows that while drivers have been generally satisfied with their new-vehicle purchases lately, smartphone connectivity continues to fall short of consumer expectations. “Owners are caught in the middle when vehicle and phone technologies don’t properly connect,” said Dave Sargent, v-p of automotive quality at J.D. Power.  […]

Toronto, Ontario — Since early April, U.S. car dealers have been buying used cars from Canada to combat microchip shortages. However, over the last few months, the U.S. has been gobbling up even more of Canada’s inventory, according to new data from J.D. Power and ALS. “Everything seems to be in high demand,” Jonathan Banks, […]

Toronto, Ontario — The 2021 Kia Rio, a subcompact hatchback with a European-influenced design, has earned J.D. Power Canada Alg Residual Value Awards for 2021 in the subcompact segment.  ALG’s Residual Value Awards recognizes the vehicles segments that are projected to hold the highest percentage of the manufacturer’s suggested retail price (MSRP) after a four-year […]

Toronto, Ontario — J.D. Power has announced the death of its founder and retired chairman, James David Power III, who died this weekend at the age of 89. “The world has lost a true pioneer and we have lost a visionary spirit that has continued to inspire, inform and galvanize our company’s growth for over 50 […] 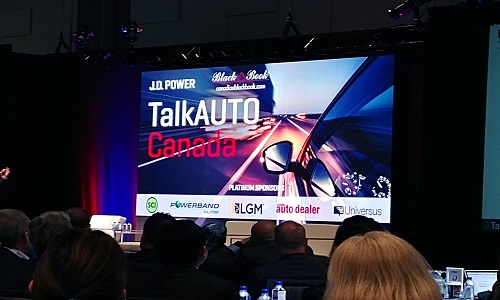 By CRM staff Toronto, Ontario — November 9, 2018 — The TalkAUTO conference, hosted by J.D. Power and Canadian Black Book, an automotive dealer website, attracted around 600 representatives from various OEM’s, dealers, and suppliers to hear insight on the where the future of the automotive industry lies.  Collision Repair caught up with James Carter, […]

By CRM staff Toronto, Ontario — November 2, 2018 — More customized vehicle valuations are now available to some users of  J.D. Power services.  A new feature that will enhance and customize each vehicle valuation, referred to as a VIN (Vehicle Identification Number) Based Option, is available to NADA values online subscribers. The feature utilizes packaging, content and descriptive […]