Toledo, Ohio ⁠— Jeep Wrangler and Jeep Gladiator corrosion warranties are being called into question because every warranty dictates a corroded aluminum panel must also be perforated. The U.S. plaintiffs in the corrosion warranty lawsuit allege they overpaid for their Jeep because of paint problems that occurred due to premature corrsion of the aluminum body […]

Toronto, Ontario ⁠— This week, Uber outperforms lift in the immediate aftermath of pandemic lockdowns; automakers announce Q3 losses across the board and Tesla CEO Elon Musk looks to solve world hunger with the UN’s assistance. Do you even Lyft? Market analysts say that Uber is outperforming Lyft as ridesharing ramps up from pandemic lows. […]

Windsor, Ontario — Employees of FCA Canada (now Stellantis) are giving back in a big way to the community that has supported their company for so long with the donation of $943,149 to the United Way/Centraide Windsor-Essex County 2020-2021 campaign. Announced on Tuesday, this donation is the single largest ever made to the United Way […]

Windsor, Ontario — Stellantis, formerly known as Fiat Chrysler (FCA), will idle its minivan plant in Windsor, Ontario, until the end of April, due to the global microchip shortage. Production is scheduled to resume May 3, the automaker said. The Chrysler Pacifica, Voyager, Grand Caravan and Pacifica Hybrid minivans are all built at the Windsor […]

Toronto, Ontario — When safe, signal and pull over into the right shoulder—I-CAR has the latest on a new update from FCA (Fiat Chrysler Automobiles) concerning steering system inspections and proper replacement procedure after a collision. The FCA Steering System Position Statement states: “If the vehicle is involved in a collision where the airbag has […]

Toronto, Ontario ⁠— In this week’s Tuesday Ticker, PPG pummels its 2019 Q4 numbers, Fiat Chrysler and PSA make a final handshake and Axalta preps to unveil its full-year results for 2020. PPG powers through PPG has fourth quarter 2020 net sales of approximately US$3.8 billion, more than two percent higher versus the prior year. […] 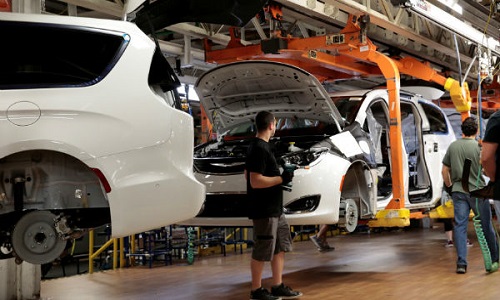 By CRM Staff  Toronto, Ontario — April 2, 2019 — Fiat Chrysler Automobiles (FCA) has announced it will be cutting 1,500 jobs from its Windsor, Ont. plant. According to an email statement, the manufacturer plans to eliminate the third shift at its assembly plant beginning September 30. Slow minivan sales have plagued the factory which produces Chrysler […]