Toronto, Ontario — The National Highway Traffic Safety Administration (NHTSA) has new guidelines promoting the need to balance the needs of cybersecurity and third-party access, in light of the right to repair movement and multiple cases of vehicles being stolen or compromised due to inadequate security systems. Effectively an update of its 2016 predecessor, “Cybersecurity Best […]

Toronto, Ontario – In this week’s electric and autonomous vehicle report, Tesla raises the price of FSD in Canada, EV charging stations are becoming a target for hackers and Canadian mining company Vale signs a deal to provide nickel for Tesla batteries. Full Self-Driving, Fuller Price Canadians will have to shell out just a little […]

Toronto, Ontario — Proving the need for adequate online protection for businesses, Toyota has announced that it will be forced to halt production at its 14 Japanese factories on Tuesday, due a suspected cyber attack suffered by one of the automaker’s plastic parts suppliers. Toyota says they expect to lose about 13,000 vehicles in output […]

Toronto, Ontario — As automotive technology evolves to become more autonomous and electrified, cyber threats have become a cause for concern. So, to help mitigate those risks and prioritize research and development in securing autonomous vehicles, electric vehicle and autonomous vehicle cybersecurity provider AUTOCRYPT and the University of  Windsor’s SHIELD Automotive Cybersecurity Centre of Excellence, […]

Hartford, Connecticut — A recent study from an American risk management firm seems to show that paranoia surrounding the prospect of vehicle-based cyberattacks is on the rise among U.S. drivers. In a study conducted by Hartford Steam Boiler (HSB), a subsidiary of Munich Re, it was found that 37 percent of respondents “somewhat or very […]

When It Rains, It Pours: ICBC rebate cheques delayed due to cyberattacks

Victoria, British Columbia — In yet another twist on the path to British Columbian drivers finally getting rebate cheques from ICBC’s pandemic savings, the crown insurer reported on Wednesday that they suffered a cyberattack that has caused a temporary delay in the cheque delivery process. The Insurance Corporation of British Columbia (ICBC) reported that the […]

In-Cyber Insights: Most shops underprepared for cyberattacks, according to new report from APMA

Report: Automotive cybersecurity to grow to $759 million by 2023 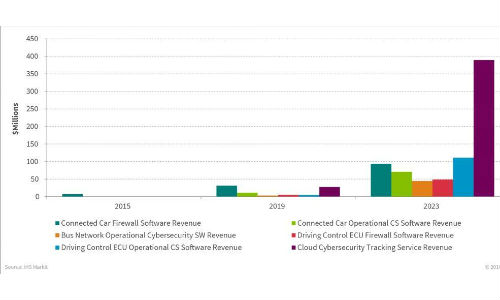 Southfield, Michigan — September 28, 2016 — The era of the connected car brings new possibilities, but it also brings new risks. Cybersecurity is expected to be a growth industry in coming years, according to a new report from IHS Automotive. There are nearly 112 million vehicles now connected around the world, according to the […]