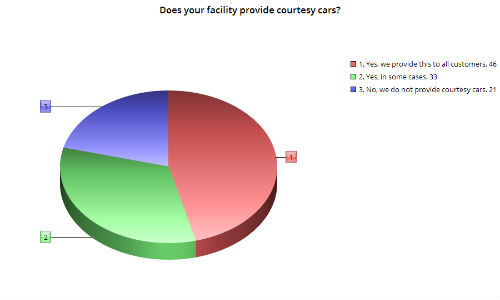 Hamilton, Ontario — February 14, 2017 — Collision repair is inextricably linked to the business of car rentals, so much so that average length-of-rental is often considered a proxy for repair times. Our latest survey asked readers to let us know about how rental cars are handled in their organizations.

Our next survey seeks to establish a broad look at training, including how often training is being undertaken and by whom. You can participate in the training survey here. It should take less than two minutes to fill out.

First, our survey asked “Does your facility provide rental cars to customers outside of what their insurer provides? For example, if their policy only provides a rental car for seven days, but the repair takes nine days, do you provide them with a rental car for those last two days?” A total of 46 percent of respondents indicated that they provided courtesy cars for all customers, free of charge. A further 33 percent that they did this “in some cases.” Finally, 21 percent indicated that they did not provide courtesy cars.

Next we looked at average length-of-rental. It should be noted that repairers were answering this question on the fly during a web survey, rather than sitting down with a bunch of spreadsheets and actually going over the numbers. However, it does provide a good “horseback estimate” of how long rental times currently are at our respondents’ shops. In total, 57 percent indicated that the average length-of-rental was between four and seven days, with 43 percent indicating that it averaged between eight and 11 days.

You can take part in our next survey on training at this link. It should take less than two minutes to fill out and we’ll present the results next Wednesday on collisionrepairmag.com!