Survey: Majority of shops are at least 20 years old 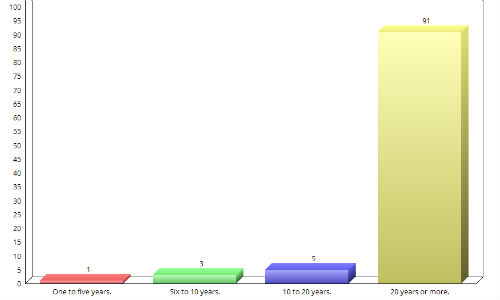 Hamilton, Ontario — April 25, 2017 — There’s something to be said for passing certain milestones, like the 20th anniversary of your business. Most of the respondents to our latest survey on business longevity fall into this category. In fact, a substantial number have been in continuous operation for over 60 years.

Collision Repair magazine runs different surveys every week. Our next survey focuses on total losses. You can take that survey here.

The vast majority of the shops surveyed can definitely be considered established firms, having been in business for 20 years or more (91 percent). The young shops tend to be few and far between.

It should be noted that about 10 percent of respondents chose “Other” for this question and gave us the actual number of years their facility had been in operation.

In every single case, the answer placed them in the “20 years or more” bracket, and they are included there in the accompanying graph.

However, quite a few of those shops have actually been in operation for 60 years or more. One shop even noted that they had been in operation for 101 years! There are times that we regret the anonymity of our surveys and this is one of them. If this is you or someone you know, please get in touch with us via email to editor@collisionrepairmag.com.

Repairers who had indicated they owned or co-owned the business were asked if they were also the founder of the operation. The “No” answers (52 percent) narrowly squeaked by the “Yes” answers (48 percent). Founders are still common and active in the industry. In fact, we asked those who indicated that they did not found the business themselves if the founder was still actively involved. Even then, founders were still involved in the business in some capacity in about 10 percent of cases.

If the current owner didn’t found the business, how did they become involved? Answers to this question indicate that collision repair is still very much a family business. The majority of survey respondents who did not found the business themselves are the sons or daughters of the founder. Sprinkled in among them are a few grandchildren. In total, they comprise about 71 percent of the non-founder survey respondents.

The next most common path to ownership was to purchase the facility from the previous owner after working there, with 15 percent of respondents indicating they had “worked their way up.” The remaining non-founder owners were almost evenly split between purchasing the facility without working there (8 percent), and having purchased the shop as an investment (6 percent).

Our next survey focuses on total losses and whether you think they’re on the rise. The survey consists of just a few multiple-choice questions and can be found here. Make sure to watch for the results next Wednesday on collisionrepairmag.com!