A year into the pandemic, shopowners get creative in boosting bottom lines

It has been a challenging year for many small businesses due to the COVID-19 pandemic. But some collision repair centres are taking on the challenge by making adjustments, as well as finding new ways to draw business amid slowdowns.

At L&M Auto Body in Barrie, Ontario, Darren Castonguay says business has been steady over the past year but has recently noticed a slight drop since cases of the COVID-19 variant have been reported in his area.

“We’re not getting the walk-ins as much and I think people are becoming even more careful now,” he says.

To fill in the gaps of time in between jobs, Castonguay has tapped into projects he doesn’t frequently take in.

“I’ve been taking in some bigger jobs, like older cars, which I don’t normally do,” he says. Jobs coming in from insurance are first priority but these fillers can be worked on in between and the customer isn’t expecting this type of project to be done right away.

They have also had to deal with some adjustments to day-to-day operations. Customers come by appointment and they stay in the vehicle while staff walk around to make the estimate. They then hand the estimate to them or email it to them. And part deliveries now get dropped off outside instead of being brought in.

Castonguay’s business has been around for 45 years and says his shop’s reputation has helped keep him stay afloat as he hardly does any advertising. He is thankful for the support he has received during the past year but adds that there are a handful of auto body shops on his street that are really struggling.

Much like Castonguay’s shop, business at Seneca Auto Body in Mississauga, Ontario, hasn’t been affected too much by the pandemic, but owner Robert Fluney points out that it’s been a tough year to some degree for all auto body shops.

“It’s hard for people to be able to afford things for their car right now, let alone be able take care of themselves,” says Fluney. “Nobody knows what’s going to happen over the next few months. If you talk to the top shops out there, I can safely say that everybody in the industry is suffering,” he says.

Fluney also credits good relationships with clientele for not being in worse shape than he is. “I’ve been in business for over 30 years and when you treat people fairly and honestly, they come back. I can’t buy that business – I’ve got to earn it, and I did.” 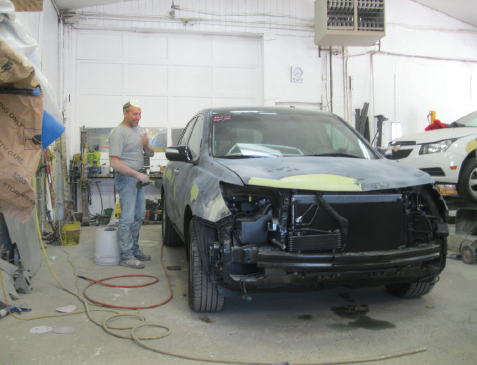 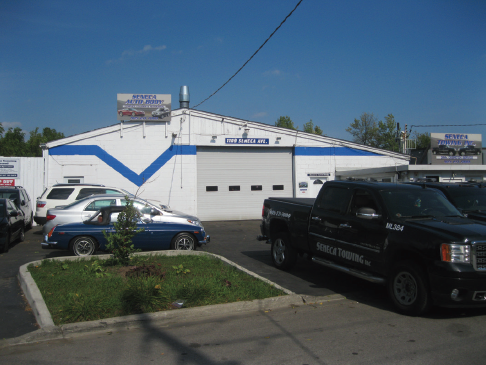 Top Left: “It’s hard for people to be able to afford things for their car right now, let alone be able take care of themselves,” says Robert Fluney, owner of Seneca Auto Body. Above right: Seneca Auto Body in Mississauga, Ontario, says it’s been lucky to have fared reasonably well thus far in the pandemic. Below left: L&M Auto Body in Barrie, Ontario.

“Nobody knows what’s going to happen over the next few months. If you talk to the top shops out there, I can safely say that everybody in the industry is suffering,” 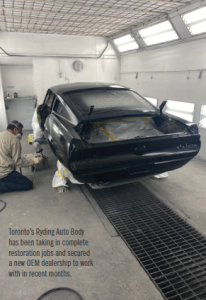 He says all shops want to improve their business right now but it’s difficult to do with the uncertainty of COVID-19. And shop owners are doing what they can to hold on to their staff.

Fluney says his customers were once greeted by all his office staff when they came in but now two employees work from home and another employee manages the reception area on her own. He praises all of his staff, especially shop crew, for going above and beyond during this past year.

Mark DeLorenzo, owner of Ryding Auto Body in York, Ontario, says he’s trying to hold on to his staff. Ryding was started by his father and has been in operation for more than 50 years. The shop had a 30 percent drop in insurance jobs and customer visits have been down considerably.

DeLorenzo has been doing mail-outs, social media posts on Facebook and Instagram, and is offering car washing with service. He has also been selling used cars he purchases at auctions. “It helps keep my guys busy,” he says. “I’m pretty sure other shops are doing this now too.” They’ve also been taking in complete restoration jobs and secured a new OEM dealership to work with.

DeLorenzo has been taking this time to take a closer look at overall work flow in their production department. “We created a shop layout and looked at how we could reduce wasted motion, like moving the cars too frequently, and looked at our key equipment and tooling,” he explains. They have also implemented a new barcoded inventory control system to help them get a better control on paint, materials and shop supplies.

Despite the past year of change and challenges, DeLorenzo says it has at least been rewarding that these improvements have resulted in better organization and efficiency for them. “And I’m glad I have such a good team because it makes it a lot easier to succeed in difficult times,” he says. “All I can do now is just hope for better days to come.”