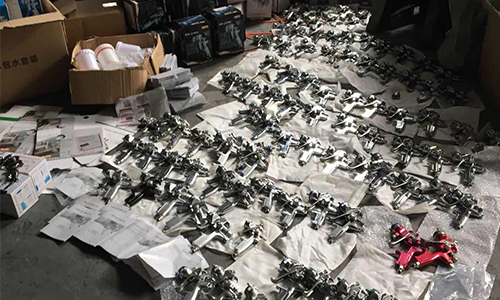 Toronto, Ontario — January 10, 2018 — In an effort to protect customers from under or non-performing SATA spray gun copies, SATA has remained active in catching counterfeit products, an issue that occurs globally. Recently, police held a successful raid against a number of copycats producing fake spray guns in China. Several people were consequently arrested, and the fake guns seized.

According to SATA Canada general manager John Turner, counterfeiters have become more brazen in recent years, copying the look of SATA products right down to the packaging. “Although these fake guns may look authentic, they can’t duplicate the efficiency and quality, which is the result of over a hundred years of German engineering,” he says.

Counterfeit and fraudulent products are invariably of poor quality, according to SATA, produced only to turn a quick profit at the buyer’s expense.

When illegal copies are found, SATA takes the necessary steps to ensure that the proper law enforcement authorities such as customs, federal marshals or police raid the properties and seize any counterfeit goods. SATA’s efforts have been resulting in many successful lawsuits, raid actions and other effective measures in previous years.

Fighting against brand and product piracy, SATA aims to protect the rights of customers and to strengthen consumer confidence in the SATA brand.

The best way to ensure a genuine product is to only buy from an authorized SATA distributor. Never buy from suspicious shops or unknown sources abroad, via the Internet, according to SATA.