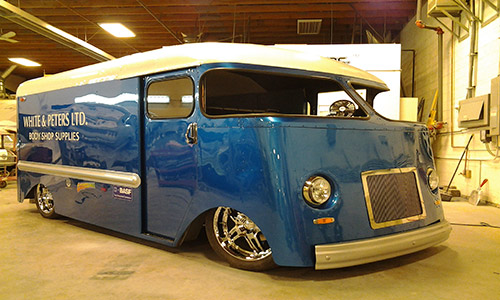 Abbotsford, British Columbia – July 22, 2016 — An old, yet completely brand new, 1950’s Chevrolet bread delivery truck is set to be one of the rarest and most unusual pieces at a premier auto auction in the US this fall.

When Mort Hall, of the BC-based spray and auto body supplier White & Peters, enrolled the help of a longtime friend to put together a special 50th anniversary piece for the company, he had no idea he would find himself in possession of one of the very few renovated motorized ‘bread baskets’ on the continent.

But that’s exactly what wound up happening after Rick Francouer and his team over at 360 Fabrication took in the unique 1951 Chevy ‘Grumman.’ Over the course of seven months back in 2012 and 2013, the group completely gutted the vehicle, taking it from a run-down, back yard recluse to a one of a kind, head-turning beauty on wheels.

“This is one of the most unique projects I’ve ever been a part of,” Francouer told Collision Repair magazine. “We literally had to drag this thing into the shop on a fork lift when we found it, because the wheels wouldn’t turn.”

After some much-needed TLC, which included the installation of a new power train, Art Morrison chassis, “high performance” 283, 400 horsepower motor, four-wheel disc breaks, top of the line sound system and lavish 1950s diner theme interior, the truck, bought for an initial $4,000, was ready to roll.

“We had some serious, serious fun fixing that truck up,” Francouer told.

From the shop, it was handed over to Hall, who spent the next four years showcasing the machine, under the White and Peters name, at various events and functions across the west coast. Now, in 2016 and valued at approximately $248,000, Hall is ready to do with the truck what he always intended on doing – selling it in the name of charity.

“It was always our intention, right from the get go, to eventually donate whatever vehicle we got for the anniversary to charity,” Hall said. “It’s such a beautiful vehicle and we’ve had some fun with it, but now I’d really like to see it moved on and have all the proceeds raised through the sale go to charity.”

Benefitting from this generosity will be Shriners Hospitals for Children, a network of 22 non-profit medical facilities operating throughout North America.

“We’re super excited that White & Peters are giving this money to the Shriners, it’s a great cause and if we’re able to get $250,000 for the piece, that’s an awful lot of money that’s going to help a lot of kids across the US and Canada,” Francouer said.

The truck is owned by Color Compass Corporation, the parent company of White & Peters, Chase Auto Body Supplies, Carlson Body Shop Supplies, PBE Distributors and Rocky Mountain Sales, and will be traveling south to Las Vegas later this year to feature in a Barrett-Jackson auction, taking place at Mandalay Bay Resort and Casino from Oct. 13 to the 15.

“There are a lot of people down there in the States that like to throw their money at things just like this, so who knows, maybe we’ll get a really nice sum,” said Francouer, who will be heading down to Vegas to check out the auction. “My brother is really into this style of vehicle and I think he would have liked to buy it. Maybe he’ll be heading down there to bid!”