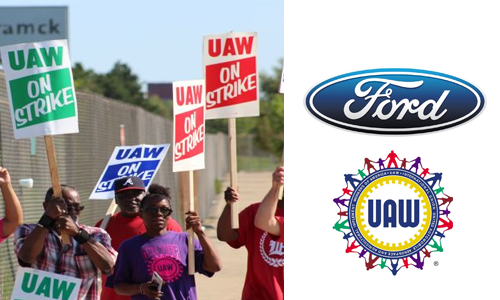 Toronto, Ontario — After General Motors and the United Auto Workers (UAW) ratified the 2019 Collective Bargaining Agreement last Friday, the union has turned its attention to Ford.

UAW General Motors members reached an agreement with GM on Oct. 25, ending the longest automotive strike in 50 years. Hours after the 40-day strike came to a close UAW president Gary Jones announced that the union will proceed with pattern bargaining at Ford.

“Now that the General Motors strike has ended and the agreement has been ratified, we will proceed with working with UAW vice president Rory Gamble, director of the UAW Ford Department and its staff,” said Jones in a press release.

Union leaders officially opened discussions with Ford on July 15 and have been talking at length about “non-economic issues” while the UAW pursued economic terms with GM.

The UAW uses pattern bargaining, meaning GM’s four-year deal will be used as a template in the upcoming negotiations with Ford. The ratified contract between GM and its UAW includes an economic package consisting of a US$11,000 per member signing bonus, performance bonuses, two annual raises of three percent, two four-percent lump sum payments and holding the line on health care costs.

The UAW-Ford team aims to shape a contract for 55,000 factory workers, with Ford being the largest employer of American hourly employees in the auto industry.

Talks are being led by Gamble and Bill Dirksen, vice president of labour affairs at Ford. So far the team has focused on issues of job security, health and safety, attendance and time off, seniority, pension, and a 401(k)-like retirement program with continuous improvements and joint programs.

Sources close to the talks are reportedly saying that this week marks “the final bargaining stretch” between the union and the automaker. Talks are expected to be “smoother” than efforts at GM, but certainly not easy.

Moreover, the UAW has also targeted fellow Detroit automaker Fiat-Chrysler. Like Ford, bargaining committees dealing with Fiat Chrysler already have strike authorization, though it is unclear when the earliest possible strike could occur.