Rejean Marchand does not dream of success — he works for it

It’s rare to come across someone who makes success look easy, and while Rejean Marchand sure does, nothing happens without effort. Rejean, has been the owner of two ProColor Collision centres in Shawinigan and Sainte-Julie, Quebec, from 2009 and 2013, respectively. That said, his legacy doesn’t begin when he purchased his first facility — it dates to a time before him, when his grandfather opened his first shop in Montreal in 1947.

After the death of Rejean’s grandfather, his father bought the business in order to keep it in their family. Living just across the street, young Rejean was a familiar face at the shop up until the death of his father when he was only nine years old, at which time his mother was forced to sell the business. Just five years later, 14-yearold Rejean got himself a job working at the very same shop, which had been previously owned by his father and grandfather.

Eventually, after pursuing almost three years of college studies in computer programming, Rejean’s passion for collision repair reappeared. By the 80s and at age 21, he opened his very first body shop on the south shore of Montreal. “It’s a funny story,” Rejean told Collision Repair. “I rented out space from a shop to fix my own car, and then my friends kept calling me saying that they had had accidents and needed my help. Another friend called me and so on—so then I decided to register my company. A year after, I ended up moving to another location, and a year after that I bought that location.”

After six years at the helm, Rejean decided to sell the business. He became an appraiser for a short period of time and then opted for a position in sales. He worked as a paint specialist for United Auto Parts (UAP) for five years where he became fascinated with the marketing and financial side of the automotive aftermarket by participating in the development of the Autopro Collision program. 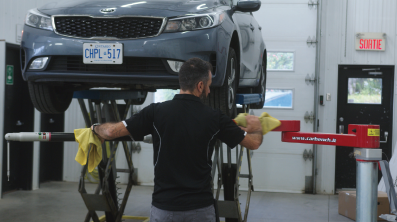 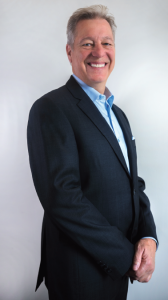 After leaving UAP, Rejean cultivated his newfound interests through new work as a sales representative, and eventually, as branch manager for AkzoNobel’s corporate store in Quebec. Soon after, Rejean and his family moved to Toronto where he pursued work as a marketing specialist for the coating’s company, and afterwards, as marketing manager for AkzoNobel’s Canadian operations.

As part of his marketing role in the early 2000s, he became chairman of the auto refinishes industry at the Canadian Paint and Coating Association (CPCA). In this role, Rejean was instrumental in stopping the government from putting in place a new VOC regulation, which had been adopted by other European countries. This new law was designed to make shops responsible for managing and reporting their VOC consumption on a monthly basis within a maximum limit. The government intended to provide shops with a VOC number, like a GST, and to determine each shop’s limit. An alternative suggestion was made, influenced by the South California Regulation (Rule 1151), that VOC limits be controlled by category of product availability and that the responsibility be placed on manufacturers and distributors, as opposed to individual shops. Since the model and products were already established, this was a zero-cost solution for the government, and the proposition was accepted. “This is how we got the regulations that we have today”, said Rejean. Following his marketing position, Rejean was promoted to the position of product manager for AkzoNobel’s North American operations, moving with his family from Toronto, Ontario to Atlanta, Georgia.

After a few years in the United States, Rejean’s work permit was set to expire and they moved back to Toronto where he became operational manager for all the AkzoNobel branches in Canada.

With little left to challenge him in the role, Rejean decided to leave AkzoNobel after 13 years with the company.

For a while as he lived in Toronto, Rejean worked for a tool and equipment manufacturer as an Eastern regional manager, while simultaneously seeking to invest in a small business, which would allow him to leave the corporate world and return to his passion in the collision repair industry. It was in the summer of 2009 that he purchased his shop in Shawinigan, and shortly after, a shop in Louiseville in 2010 (sold in 2016) and Ste-Julie in 2013. During his time at AkzoNobel, Rejean had undergone extensive training in finance, marketing and management – expertise he used to build the business plan for each shop he owns.

In 2015, according to his business plan, Rejean undertook a major investment to revamp the shop in Ste-Julie. This involved completely redoing the shop’s layout, from office to paint booth, and updating all the equipment in anticipation of future industry regulations. This along with obtaining a CAA banner and Cle Verte (gold level) were among the many steps outlined in his business plan.

As far as his shop in Shawinigan, in early 2016 he constructed a brand-new building and purchased all new equipment for that shop as well.

“We actually purchased the neighbouring properties and built the new facility five feet apart to expand from 215 sq. m. (2,300 sq. ft.) to 705 sq. m. (7,600 sq. ft.),” said Rejean. Rejean is proud that all his employees can work under exceptional conditions and environment, which is far from what he has experienced in his own career.

It’s no secret that the world of collision repair has changed more in the last five years than in the previous 40 years, and that today, the industry’s two major challenges are profitability, as well as finding quality technicians. These challenges and opportunities stress the importance of involving staff in creating and achieving a shop’s plans and objectives.

As Rejean says, “In today’s world, as new challenges arise, you need to update your business plan in order to successfully move forward”.