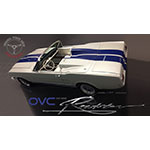 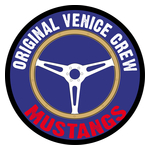 “The new OVC Shelby G.T.350 Roadster was an inspired project from a group of hot rodders who spanned the last 60 years,” said Jim Marietta, CEO of OVC. “When collectors and enthusiasts asked us for a custom roadster, our team leveraged lessons learned over the decades. The car incorporates elements on the front of the roadster that Peter Brock created for our continuation cars. Famed Ford designer Camillo Pardo styled the roadster’s cover and back half of the car. Shelby American legend and OVC member Ted Sutton weighed in on mechanical aspects of the car. It truly transcends the decades to create the ultimate top-down motoring experience.”

The design brief for Pardo was broad but succinct.

“My mission was to blend the iconic design penned by Peter Brock for the 1965 Shelby G.T.350 with contemporary stylish elements to create a unique and fun heritage roadster,” said Camillo Pardo. “Collaborating with Jim Marietta and Ted Sutton, I designed a roadster top that invokes the original Shelby Cobra and then added touches that link the heritage car to the modern versions of the Ford Mustang. I’m proud that we received a thumbs up on the design from Peter Brock.”

OVC put the same care in planning the new OVC Shelby G.T.350 Roadster as it does the competition model cars it builds.

“Many have seen photos of the legendary 1965 Shelby G.T.350 Competition Model ‘flying’ over the pavement with all four wheels off the ground,” said Marietta. “The new OVC Shelby G.T.350 Roadster offers the same level of fun for the street. The handsome sunny day cruiser has plenty of smooth horsepower and road stability. The roadster is stylish enough for any occasion, whether it is the beach, the country club or a drive in the country.”

The new OVC Roadster is priced at $289,000 and comes standard with:

OVC plans to show the new roadster at various locations across the Monterey Peninsula during collector car week. It will then travel to shows across the USA over the next two years, including the 2022 Las Vegas Concours. Only 24 production models will be built.

The Original Venice Crew (OVC) is comprised of former Shelby American employees (1962 to 1965) Ted Sutton, Jim Marietta and other Shelby team members. Those interested in an OVC Shelby G.T.350 Roadster can call (714) 305-8578. Additional information is available at www.ovcmustangs.com.

About the Original Venice Crew

Founded by Jim Marietta, the Original Venice Crew (OVC) is the only company authorized by Carroll Shelby Licensing to build continuation Shelby Mustang G.T.350, Competition Model “R” cars with the optional independent suspension and OVC/SFM series serial number. Founded and operated by some of the people who built the first Shelby G.T.350 “R” (5R002) over 50 years ago, the company will produce only 36 “competition model” 1965 cars in Southern California. Each car has production versions of experimental parts designed by Peter Brock but not integrated into cars during the 1960s. Documentation of the cars will be submitted to the Shelby American Registry administered by Carroll Shelby International. Additional information is at www.ovcmustangs.com.

PrevPreviousAutonomy Launches Month-to-Month Auto Insurance as Part of Subscription Bundle in Partnership With Liberty Mutual Insurance
NextCan You Believe This?! August 19, 2022Next