What the kids are saying about collision repair

Two dozen people file into the school hall, clipboards at the ready. They take their assigned seats; some nervously tap their pens while others nonchalantly count the planks in the ceiling.

Except they’re not students—they’re employers in the autobody industry, looking for their next hire at Centennial College’s autobody work fair. Jesse Kennelly teaches autobody repair at Centennial College and has seen hundreds of students go through the same process. He says, most of the time, employers aren’t looking for the most skilled candidate—they’re looking for the right fit. “Employers want people with initiative. Someone who shows up on time and doesn’t have excuses. You can teach skills, but you can’t teach character,” he said. In the wake of Canada’s skilled worker shortage, attracting top-notch workers is more important than ever.

Collision Repair mag caught up with some spry members of the automotive aftermarket to hear their thoughts and what makes a workplace irresistibly attractive.

Quality never goes out of style. “[Younger repairers] definitely seek collision centres with an overall organized workplace and a good system, wherein everyone has a job and a role,” says Dorien Lozeau, lead painter at CSN Black Ace. “It’s important the shop puts quality over quantity.” Similarly, no tech wants to feel unsafe in their place of work. “When you walk first in, the equipment should be put up and organized,” said, Devon Edmonds, a first-year student at Centennial. “I wouldn’t want to work in an unsafe shop, for obvious reasons.”

Edmonds adds one of the red flags to watch for is “a short temper or screaming at you instead of helping.”

His classmate, Andy Persaud agrees. He says the ideal employer is someone who’s willing to teach and demonstrate, not leave him on his own.

“Apprenticeships should be a learning experience throughout.” 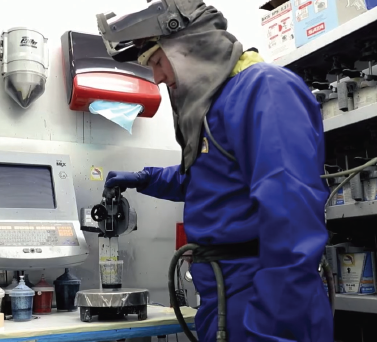 Feedback with a fix

When Alex Mitrevski worked in a collision centre in high school, his superiors would ensure any mistake he made was fixed by his own hand. His colleagues never got mad nor threw wrenches at him—instead, they offered solutions or suggestions.

“If the technician sees you doing something wrong, they should teach you the right way. Sometimes they won’t tell you it’s wrong until it’s completely done, then they’ll go and fix it themselves. When you ask how they did it, they’ll say they did it with magic,” Mitrevski recounts.

Newcomer to the autobody industry Navida Persuad says she wants to learn, but knowledge won’t pay the bills.

“Apprenticeships are hugely beneficial,” she says. “For some, unpaid work is quite literally impossible. Being mentored isn’t enough—even a casual helper has bills and a family. There are people out there that cannot afford to do work without pay.”

“Even an apprentice needs to be paid with a living wage to support themselves and their family,” says Jessica Carter, vice president at Colourworks Autobody. “Even if they’re fresh out of high school, simply helping take bumpers off or cleaning, they’re adding value to the team.”

For women, working in a male-dominated can be particularly dicey. Beyond the physicality of the job, some employers— either knowingly or unknowingly—have a workplace that is hostile to women.

“When I tell people I work in the autobody trade, reactions are a mixed bag,” says Persuad. “The reactions from women are empowering, but some men just ask, ‘why?’” Kennelly says he sees the same stereotypes as a professor of the trade.

“Some people simply lack the workplace filter and speak with inappropriate language. Some of the female students feel really nervous about working in a male-dominated field,” said Jesse.

Ultimately, almost all these issues can be solved by a boss involved and familiar with happenings on the floor.

“I was nervous starting out in collision repair, especially being female,” said Taylor Sparling, an autobody assistant at Right Drive. “I was lucky that my workplace was extremely supportive. [President and CEO of RightDrive] Michael Kent is very personal, which has been key to my experience. For me, it’s hugely beneficial for the owner understanding how things operate on the ground,” said Sparling.

“It’s up to the leadership of the shop to maintain communications, leadership and strong camaraderie. Having a coaching relationship is important,” says Jessica. “At the end of our journey, we may get a very valuable team member.”