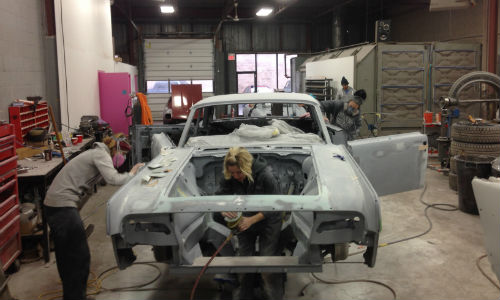 Toronto, Ontario — January 13, 2016 — It’s that time of year again, when the industry starts ramping up for the auto shows coming to your local convention centre.

In Toronto, GTA residents are getting ready for the Canadian International AutoShow, occurring February 12 to 21 at the Metro Toronto Convention Centre.

This year’s event will be bigger than ever, with various events and booths showing off the latest advance. But for those looking for some traditional auto goodness, make sure to check out the Kreator Custom Motorcycles booth. The owner of the GTA custom chopper house recently acquired a ’63 Lincoln that is currently being restored with the help of Hilary Noack and her staff at Ink & Iron, the Toronto-based all-female collision repair facility.

“It’s a pretty awesome car. We just got it back from the sandblasters,” says Noack.“We’re doing the patch work and prep work on the car. Our job is to do all the rust repair and metal work, get the car prepped and block sanded out, and then deliver it to CSN-427 Auto Collision this Friday morning for paint,” she said.

The final product will feature an air ride air ride, steel wheels and a modern coyote motor. The Lincoln won’t just be on display at the show. George Tchor, founder of Kreater Custom Motorcycles plans to drive it.

Noack also mentioned that the car will be on display at Motorama, a relatively new show in Toronto that focuses more on custom cars and motorsports. The show will happen at Toronto’s International Centre in March.

As for business at Ink & Iron, Noack reports things are going well. “It’s going pretty good. We’re keeping busy. We have a lot of cool lprojects coming in,” she says. A lot of the work is coming in through word of mouth. But she also finds she getting a lot of business through Kijiji. “I’m constantly advertising on there. And I find that’ a good way to find people,” says Noack.

The shop is developing a reputation for working on old and classic cars. The owner of an older ’57 Belair saw the ad and recently contacted her. “He the saw Kijiji ad and got ahold of us. I think people are beginning to associate us with the older cars,” she says. Ink & Iron is still in its early stages. But Noack hopes business will grow in the months to come. “I hope that when this spring and summer comes along and people start seeing the work we’ve done out on the road and at shows … we’ll get even more work.”

The Canadian International AutoShow is now over 40 years old, and it’s only gotten bigger. This will be a bigger show than ever, with more than 600,000 sq. ft. of displays.

Motorama doesn’t have the sheer size, but it has plenty to hold your interest. On March 12, legendary custom car builder Jimmy Shine will appear alongside ZZ Top guitar ace Billy Gibbons. Apparently Shine and Gibbons are long-time friends. They have a passion for custom cars, and are currently collaborating on a new automotive-themed reality TV show.

The pair will be at Motorama on Saturday, March 12 to meet with fans, sign autographs, take pictures and participate in a ‘Custom Car & Hot Rod’ panel discussion. Gibbons and Shine are also scheduled to attend the Car Owners & Exhibitors Cocktail Party on the evening of March 11.

“We are extremely excited that Billy Gibbons and Jimmy Shine are coming to Motorama,” said the show’s automotive co-ordinator, Gary Challice. “Both of these guys are legends in their fields and I know it’s going to be a big thrill for everyone who comes to the show to meet them in person.

“Jimmy Shine has done amazing work at So-Cal Speed Shop and recently started his own Jimmy Shine Work Shop. And everyone knows Billy Gibbons’ music and the way he incorporates his love of custom cars into almost everything he does. These guys are great buddies, they know a ton about custom cars and it’s going to be a lot of fun seeing them at Motorama.”

Shine and his work has been featured on several reality TV specials on the Discovery Channel, among them “Hard Shine,” “Weaponizers,” and two seasons of “Car Warriors.” Billy Gibbons has a large collection of vehicles including a ‘33 Ford Coupe called Eliminator, which was, of course, the car that appeared in the videos for ‘Sharp Dressed Man,’ ‘Gimme All Your Lovin’ and ‘Legs’ in the early ‘80s.