IIHS Report: Vehicles with good driver-side protection may not offer the same to passengers 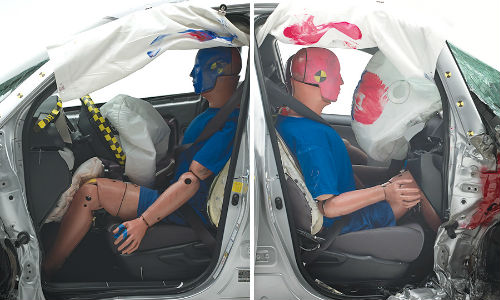 Arlington, Virginia — June 26, 2016 — A new study from the US-based Insurance Institute from Highway Safety (IIHS) shows that drivers of vehicles with good small overlap front ratings can expect to be protected well in a frontal crash involving the left corner of the vehicle, but good protection doesn’t always extend across the front seat.

The Institute conducted 40 mph passenger-side small overlap tests on seven small SUVs with good driver-side small overlap ratings. Only one of the vehicles, the 2016 Hyundai Tucson, performed at a level corresponding to a good rating, and the others ran the gamut from poor to acceptable.

The results have prompted IIHS to consider instituting a passenger-side rating as part of its TOP SAFETY PICK criteria.

“This is an important aspect of occupant protection that needs more attention,” says Becky Mueller, an IIHS Senior Research Engineer and the lead author of the study. “More than 1,600 right-front passengers died in frontal crashes in 2014.”

Small overlap crashes pose a challenge because they bypass a typical vehicle’s main front structure. Since the test was introduced, 13 manufacturers have made structural changes to 97 vehicles. Of these, nearly three-quarters earned a good rating after the changes.

IIHS conducts its tests for frontal ratings with a driver dummy and with the barrier overlapping the driver side. The reason is simple: Every vehicle on the road has a driver, but there isn’t always a passenger riding along.

“It’s not surprising that automakers would focus their initial efforts to improve small overlap protection on the side of the vehicle that we conduct the tests on,” says David Zuby, IIHS Executive Vice President and Chief Research Officer. “In fact, we encouraged them to do that in the short term if it meant they could quickly make driver-side improvements to more vehicles. As time goes by, though, we would hope they ensure similar levels of protection on both sides.”

The recent passenger-side tests show how big the differences can be. In this group of small SUVs, most didn’t perform as well when they were crashed into a barrier on the right side instead of the left. That was even true of models that appeared symmetrical after removing bumper covers and other external components.

“When structural improvements are visible only on the driver side, there are large differences in performance,” Mueller says. “But the inverse is not true. Some vehicle structures look the same on both sides, but they don’t perform the same. That’s why we can’t rely on visual analysis but need to monitor this issue and possibly begin rating vehicles for passenger-side protection.”

These two vehicles had the highest amount of passenger-side intrusion. Intrusion measures are important because they indicate how well the structure held up; the greater the amount of intrusion, the higher the likelihood of serious injuries.

Maximum intrusion in the passenger-side test was 13 inches more than in the driver-side test for the RAV4 and 10 inches more for the Rogue. The Rogue’s door hinge pillar was torn off completely, and the RAV4’s door opened. In a real crash, an open door would leave the occupant at risk for ejection.

Two vehicles that appeared symmetrical, the 2014 Subaru Forester and the 2015 Mazda CX-5, also had substantially more intrusion in the passenger-side test than in the driver-side test.

In earlier research, Mueller found that the most common change manufacturers make to improve vehicle structure for small overlap protection is to strengthen the occupant compartment. To do this, they might use a different type of material or add a few millimeters of thickness. These changes can’t be discerned from a visual examination. A statement from IIHS says it’s likely these types of modifications were made to the Forester and CX-5, but only on the driver side.

The other three vehicles tested had relatively similar structural performance on both sides of the vehicle. The small differences that were observed could have been caused by normal variability in test results. Another factor is that vehicles are to a certain extent inherently asymmetrical. For example, structures to secure the steering wheel and pedals may provide additional bracing around the driver-side toepan, which prevents some intrusion.

“We conducted the moderate overlap tests as a spot check, and we weren’t surprised that both vehicles performed well,” Mueller says. “Many of today’s models are designed for the global market and are subject to driver-side moderate overlap tests in right-hand-drive countries. With small overlap, there isn’t the same incentive for symmetrical design because we’re the only organization conducting the test.”

IIHS passenger-side small overlap ratings would remedy that situation. The Institute could start such a program next year and make it a requirement for one of its safety awards as early as 2018.

You can see some of the test results and commentary from the IIHS in the video below.