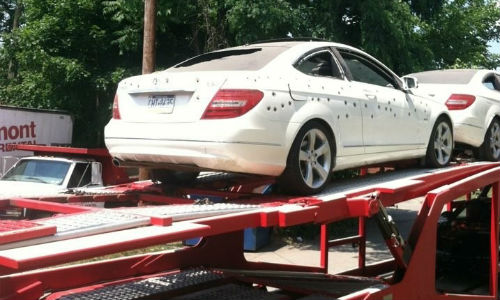 Toronto, Ontario — November 17, 2016 — The outlook for the auto industry shifts with the election of Donald Trump, CARSTAR US issues a credit card and electric vehicles are going to have to make some noise.

– Could Trump kill the demand for aluminum auto bodies? A flood of reports appeared in the media this week speculating about Trump’s effect on everything from steel prices to oil policy. Several articles looked at Trump’s possible effects on the auto industry. A report on Electrek noted that, “… not even two days after Donald Trump’s election, automakers have started their lobbying effort to weaken the requirements for fuel consumption reduction.”

According to the article, “The current goal is for a fleet average of more than 50 mpg by 2025, which would require automakers to produce more electric vehicles in their fleet to compensate for popular gas-guzzling pickup trucks and SUVs.” This is forcing automakers to use more expensive high-strength steel and aluminum in their cars. But with a President-elect so seemingly amenable to rolling back regulations, one has to wonder if the lightweighting efforts will slow somewhat.

– On the other hand it seems at least OEM may have already got into a feud with Trump on other issues. Ford CEO Mark Fields has said that the Michigan-based car maker will go ahead with plans to shift small car manufacturing to Mexico, according to a report in the Detroit Free Press. On the campaign trail Trump warned Ford repeatedly not to let those jobs go to Mexico lest the President hit the OEM with a 35 percent tariff. Perhaps the thin-skinned and vindictive Trump will take offence at the move to Mexico and will leave the CAFE regs where they are.

– Whoever Trump picks for Transportation Secretary is arguably going to be good for the rest of the auto industry. One media report suggests that Trump has chose a road industry lobbyist to lead the transition in the transportation sector. The New York Times reported this week Trump picked, “Martin Whitmer to head his ‘transportation and infrastructure’ transition team.” According to the Times, “Whitmer is chairman of the lobbying firm Whitmer and Worrall, which represents the National Asphalt Paving Association and the Association of American Railroads. According to Whitmer’s bio, he was deputy chief of staff at U.S. DOT under President George W. Bush. While there, he advised the Secretary of Transportation on ‘highway, transit, trucking, safety, energy and trade issues.’ The Times went on to say that, “This is someone whose job it is to funnel money toward companies that enrich themselves through construction contracts. He’s not thinking about how to change things up so America has an efficient, affordable transportation system. Trump has indicated he wants a highway spending ‘bonanza’, and this hire is right in line with that.”

– Even more interesting may be Trump’s pick for secretary of transportation. Has a dealership owner ever held this spot? A report on Buzzfeed notes that, “One potential Trump pick for secretary of transportation could be Rep. Bill Shuster, the Pennsylvania Republican who chairs the House transportation and infrastructure committee. Shuster endorsed Trump in April. Prior to running for Congress, he worked on his family’s farm in Bedford County, Pennsylvania, and owned an automobile dealership – experience that could resonate with Trump’s populist base.”

– The photo accompanying this article depicts what might an interesting repair challenge. Yes, those are bullet holes. This is from the “just rolled into the shop” section on the popular website reddit.com.

– A general take on the auto industry appeared in Ward’s this week. The story suggests that the overall outlook for the auto industry, “… is a little less certain than it was a week ago …” The comments were made by Steven Szakaly, Chief Economist of the National Automobile Dealers Association. “It’s important to recognize that there are some political unknowns, but the economic outlook for 2017 looks extremely positive for auto sales, particularly light trucks,” Szakaly said. “New-vehicle sales will likely level off in response to the U.S. market maturing, not as a result of the election … If increased infrastructure spending happens and certain tax cuts materialize under the new administration, it will mean a better long-term outlook.” The economist did say there were areas of concern, “…[including] rising interest rates, increasing loan terms and higher vehicle transaction prices that likely will lead to a slower-but-still-brisk sales pace in 2017.”

– The big trend at the LA Auto show? According to Forbes, it’s compact utility vehicles, or, CUVs. “A total of four new or updated compact CUVs [are] on display in LA.”

– A press release claims that the auto insurance reforms recently passed in Ontario could see insurance brokers “subject to law suits.” Apparently, personal injury lawyers are arguing that because of the transfer of, “… accident benefits dispute arbitration to the licence appeal tribunal (LAT),” some customers could lose out on accident benefits. Presumably this could lead to law suits filed against brokers who sold the insurance. The press release was put out by Shop Insurance Canada, and claims the company, “… has previously warned that customers will lose out because of accident benefit reforms.”

The press release goes on to note that personal injury lawyers in Ontario recently attended a panel presentation at the Hilton in Markham where, “… former president of the Ontario Trial Lawyers Association, Jim Vigmond, said insurers need to convince customers to take out higher policies.”

– Some interesting news out of the US, this week: Last Thursday an organization called the CRASH Network announced the launch of an Insurer Report Card. According to a report on Repairer Driven News about the new survey, “Those consumers on average have an auto claim once a decade. But shop owners, managers and estimators interact with these companies every day. No one else is in a better position to know which insurers demonstrate an understanding of, and commitment to, quality repair for their customers. We think consumers should know that, too.” Body shops taking the survey will rate carriers “based on how well the insurers’ ‘policies and practices ensure quality repairs and customer service.’ Insurers will receive between an A+ to an F based on the repairers’ input.”

– Interesting news from the American arm of the CARSTAR chain. CARSTAR Auto Body Repair Experts (the US organization) announced it is now offering a credit card through Synchrony Financial. The CARSTAR Car Care One Program (offered only in the US) helps clients access repair services.

A report on BodyShop Business notes that a survey of the US market by Bankrate.com found that almost two out of three Americans do not have enough savings to pay for a $500 car repair.

CARSTAR’s President, Michael Macaluso, is quoted as saying that, “While drivers are required to have insurance for their vehicles, sometimes all of the costs are not covered, like towing, additional repairs, detailing or a specific type of replacement parts not mandated by their policy … And, some people take a higher deductible to reduce their insurance premiums, but neglect to save for that expense should it come time for a collision repair. At CARSTAR, our motto is, ‘Relax, We’ll Take It from Here,’ so offering a financing option helps our customers through what can be a stressful time.”

– A report on USA Today says some insurers are drawing, “… up plans for analyzing risk that may change how they charge for auto insurance … Allstate recently became the latest insurer to file a patent application for a new pricing system that charges customers based on the riskiness of each trip …” According to the report, “Using sophisticated tracking technology, in the future companies could customize drivers’ rates for each trip according to the roads they choose, the weather conditions and the number of passengers, among other factors. Drivers could check the recommended (cheapest) route via smartphone or other device … under trip-based insurance, you’d have to navigate more carefully—or potentially pay more for the outing.” The story notes that Allstate has a patent pending on this tech.

– A feature in the San Diego Tribune charts the rise of Mitchell over the last 70 years and has an interview with President Alex Sun. Mitchell is celebrating its 70th anniversary this year. The report notes the company began as an, “… an auto parts and repair book publisher back in 1946.” Today the company is a “staple” in the auto repair industry, “… which has transformed with vehicles themselves into a high tech business.” Mitchell was named, “… among the best places to work in San Diego in a San Diego Union-Tribune survey, done in conjunction with Workplace Dynamics,” according to the report. The story goes on to say that the, “… company’s software enable tens of millions of electronic transactions to be processed each month for more than 300 insurance companies and over 30,000 collision repair facilities worldwide.”

A ruling on this issue has been in the works since 2013, when the NHTSA estimated that the odds of an electric or hybrid vehicle being involved in a crash with a pedestrian are 19 percent higher compared with a louder gas-powered vehicle.