Friday Fun: Sledgehammer rampage, body shop gets hit and burglar gets caught by his limited wardrobe 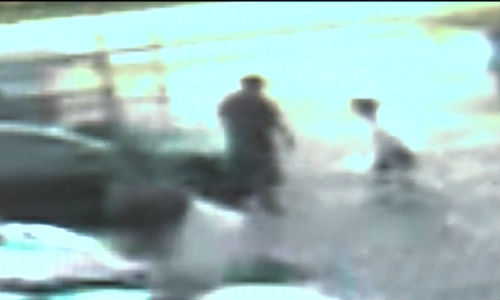 Toronto, Ontario — October 27, 2016 — It must be the season. A series of spooky, horrific and haunting scenes played out at collision repair centres across North America this past week. You may have had a tough week at work, but at least no one rammed their car into the building or came after you with a sledgehammer (we hope).

– In Florida, the local CBS affiliate reported that, “… a man went on a rampage at an autobody shop, in what a sheriff’s dispatcher described as a case of excited delirium.” The incident was caught on a surveillance camera. “As horrified employees watched in disbelief, a man in a black T-shirt took out his rage on a car at Dave’s Auto Body on Northlake Boulevard,” according to the story. “Surveillance video shows he was so aggressive he even went after some of the employees, taking swings at them.”

Speculation was that he was high on a relatively new drug called flakka. Along with bath salts, flakka is being blamed for making users act extremely erratically. The report goes on to note that in this case the, “… attacker picked up a chair, knocked over a tool box, and grabbed a sledge hammer … He stormed out to the parking lot, pounding a customer’s Jaguar, denting the hood. According to a witness, “He reeks of alcohol. He had drugs in his socks. When he took his socks off, they fell on the ground. He was very scary.” Employees figure he did about $2,000 damage to the Jaguar.

– In Lexington, Kentucky, a car crashed into a collision repair facility, according to a report from the local NBC station. “Lexington firefighters were called out after a car accidentally drove into a building Tuesday morning … Police say the driver was preparing to pull into a bay at Dings and Dents Auto Shop. He thought that the clutch was all the way in. When the driver started the car, it jumped forward and hit the building … ”

– Police in San Antonio arrested a man accused of breaking into a body shop after finding him wearing the same shirt a few days later, while hanging around the same area. An arrest affidavit noted in a report by NBC San Antonio, “… Gonzales was easy to catch after he showed up again while police were there … Police obtained the surveillance video after the break-in and were then called out again to the body shop on October 18th and found Gonzales hanging around in the area. The affidavit states that when officers picked him up, he was wearing the same shirt he was wearing in the video. Investigators say he told them he stole items from the shop and gave them to someone to sell.”

– Toronto’s Mayor John Tory is said to be, “…championing a new road safety plan that aims to cut serious collisions involving pedestrians and cyclists by 20 percent over the next decade.” According to the Toronto Star, Tory appeared at a news conference near Spadina and Dundas to unveil a plan that, “… would dedicate $68.1 million to road safety initiatives over the next five years. That’s roughly $40 million more than is currently allocated … Describing the number of traffic deaths in Toronto as ‘profoundly unacceptable,’ Tory said the new strategy was a ‘smart, collaborative approach to reducing injuries and fatalities on our streets.’ … Sixty-five people were killed on Toronto roads last year, marking a 10-year high.”

– Various online reports are claiming a new kind of coolant going into cars to fight climate change is “explosive.” The coolant, HFO-1234yf, is reportedly 10 times as costly as the coolant it’s replacing, but it’s one of the few options available. According to a report in the New York Times, “HFO-1234yf is already becoming standard in many new cars sold in the European Union and the United States by all the major automakers, in large part because its developers, Honeywell and Chemours, have automakers over a barrel. Their refrigerant is one of the few options that automakers have to comply with new regulations and the Kigali agreement.”

– Speaking of the New York Times, the paper published a major feature this week on the issue of unrepaired, recalled parts found in the used car market. According to the report, cars that are bought used will often still contain parts that have since been recalled and can be dangerous. The story recounts some cases including a car with a Takata airbag that killed a woman last month. “The airbag defect claimed another life last month, a 50-year-old Riverside, Calif., woman whose 2001 Honda Civic had been sold three times at auto auctions much like the one in Queens, before her son bought it from an acquaintance. The woman, Delia Robles, was on her way to get a flu shot when her car collided with a pickup truck.”

According to the story, “The death has highlighted a group of drivers especially vulnerable to dangerous vehicles: second, third or even fourth owners, who purchased their vehicles in transactions far removed from the protections offered to buyers of new cars … There is no explicit federal requirement that sellers of used cars fix problems related to safety recalls, or even disclose the recalls, the way new-car dealers must … Some of the vehicles on offer had another serious flaw: safety problems for which recall notices had been issued but repairs were never made.”

– More details are emerging about the new car brand Lynk & Co, being launched by Chinese automaker Zhejiang Geely Holding Group Co. Geely, as it’s known, had a reputation for producing low quality, cheap cars. To improve that brand image it acquired Volvo, a Swedish automaker with a great reputation for quality and durability. Geely has also bought up the maker of London cabs. Two smart, impressive and higher-end brands. And now all of the gathered talent is going into Lynk & Co brand’s first vehicle, the 01 SUV. The vehicle will be, “ … permanently connected to the internet and have a built-in ‘share’ button to let owners rent their car via a smartphone app similar to home-sharing via AirBNB. The vehicle will also have an open API and dedicated app store to allow third party developers to build apps for the car.” A coupe-sedan, the 02, will follow. According to a story in The Epoch Times, “Geely has been planning this for years. The automaker set up China Euro Vehicle Technology AB in Gothenburg, Sweden three years ago. A lab staffed by ex-Volvo engineers … led development of a new fully scalable ‘Compact Modular Architecture’ vehicle platform that will be shared with upcoming Volvo compact cars. Geely is a privately-owned company that makes and sells about half a million cars in China.”

– A story in the UK’s Guardian talks about the slow rise of hydrogen powered vehicles. These cars use fuel cells similar to those built by BC’s Ballard Power. The exhaust from these engines is just water. And so they have been hyped as the future of mobility. According to the Guardian story, “There’s still division on whether electric vehicles should be powered by hydrogen or with a battery. Makers of battery-powered electric vehicles (EVs), most notably Tesla Cars CEO Elon Musk, dismiss FCEVs as expensive and inefficient. There is also a lack of infrastructure to support them … But the world is crying out for cleaner transport and British entrepreneurs are making strides in this nascent industry.”

– So-called “Quick-hit videos” are becoming the new trend for up-to-date repairers. Making a small video describing what needs to be done on a job, and then sending that video to the cloent, creates a new level of personal service. A report on RepairerDrivenNews notes that some dealerships are now using an app from a company, Quick Video, “…[to] text their customers a link to a page containing only a video and the dealership’s logo. The customer watches a brief film — too long and they lose interest —of a dealership employee giving them a video tour of what he or she has noticed on the car … by shooting a video explaining what ought to be done on a car and why, ‘it empowers the consumer to make an informed decision’ as well as build trust … The videos are done in a single take and begin and end on the customer’s license plate, reassuring the customer that there’s no funny business where a technician cut to a different vehicle that needed work. No special lighting is required … Technicians are trained to shoot the cars and explain the issue in layman’s terms … The videos average 57 seconds and can only hold 4 minutes.”

– Autobody fashion goes high end. The upscale fashion magazine, W, recently had an interview with a new up-and-coming designer Cassie Goodman. The young designer was introducing Auto Body, a new brand of vintage-inspired pants line for “all makes and models.” Goodman graduated with a fine arts degree from the Pratt Institute in 2014. Her father founded Trash and Vaudeville, the legendary East Village “punk emporium.” Now she has turned her love of vintage work pants into a new fashion line.

“I used to work a bit in New Jersey and while driving through I passed by my fair share of auto body shops. I am always attracted to the architecture and aesthetics of these shops. They are these very simple utilitarian workspaces, built exactly for what is going on inside and out, but they’re also ornamented with beautiful colors and hand-painted details and signs, many of which show their history through the fading and decay. But I’m also playing with semantics a bit here. These shops service and repair vehicles to make them fit and work in the modern world. They’re maintaining and restoring the bodies of them. I want to service, maintain, and restore what we put on our bodies as well to fit into the modern world on modern bodies.”

– Really this is just a story about the lack of digital marketing on the part of automotive industry companies. But the headline is great, “The Car Dealership, A Century of No Progress.”