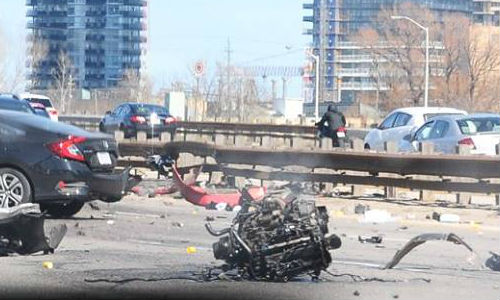 Toronto, Ontario — May 19, 2016 — This week we take a look at new tricks for catching distracted drivers, more admissions from OEMs about distorted emissions data and California has busted a big staged collision ring.

– The May long weekend is upon us and police are getting ready for a big driving weekend. Several local forces have indicated they’ll be concentrating on distracted driving as this weekend is part of Canada Road Safety Week, which runs until May 23.

– The RCMP in British Columbia’s Okanagan valley will use a high-powered scope attached to a camera to find distracted drivers. The ‘distracted driving scope’ is a piece of equipment that “fits on the end of cameras, and can spot people texting in their vehicles from up to 1.2 kilometres away.” The scope also gives police photographic evidence of the crime. A report in a local paper quoted Melissa Wutke, an officer with RCMP Traffic Services, as saying, “It’s amazing how many people think they have a unique ability to drive a 4,000-pound object hurtling down the road, without needing to watch where they’re going.” No kidding.

– In Winnipeg this week it was reported that police officers undertook an operation to crack down on distracted drivers. One of the officers involved was quoted in a local media report as saying that the police had announced when and where they would be running operations. “We make it no secret. We notified the media. We told them when we’re going to be here, why we’re going to be here,” said Const. Jason Michalyshen with the Winnipeg Police Service. Few took note, apparently. According to the report, police wrote, “eleven distracted driving tickets in just 55 minutes at a single corner on Tuesday as part of targeted enforcement for Canada Road Safety Week.” Distracted driving really is an issue. The report goes on to note that in April officers in the city issued 1,300 tickets for distracted driving in just 30 days. The report also noted that Winnipeg police will deploy plain clothes officers as “spotters” who will “walk alongside traffic and radio in license plates of people they spot on their phones or other devices.” Stay off the phone this weekend in Winnipeg.

– Police in Vancouver on Monday posed as “traffic flaggers” at a construction site to bust distracted drivers. The fine for distracted driving in BC goes up on June 1.

– The RCMP on Prince Edward Island are asking for help from the public in the case of two large wooden signs that were burned at a local auto body shop, W.B. Auto in Mount Pleasant. The RCMP is asking anyone with information on this crime to contact the East Prince RCMP at 902-436-9300.

– Enterprise Rent-A-Car is pledging $100,000 to Canadian Red Cross Disaster Relief in Fort McMurray. According to the press release, Enterprise is currently working “closely with its insurance and collision repair center partners to make sure customers have replacement vehicles when their own cars are being repaired as a result of … the fires in Fort McMurray.”

– The California Department of Insurance announced that more than two dozen people have been arrested for insurance fraud. The scammers allegedly staged auto collisions to bilk four insurance companies for tens of thousands of dollars. According to a report “insurers had paid claims, but the suspects pocketed the proceeds and did not repair damaged vehicles.” Evidence revealed the suspects “orchestrated an elaborate scheme to defraud insurers with paper collisions that never occurred or by intentionally damaging vehicles to submit fraudulent claims.

The organized ring recruited some co-conspirators with promises of cash or fixing their previously damaged vehicles. Another element of the scheme included stealing people’s identities to submit fraudulent claims.

– The traditional auto industry continues to suffer a wave of admissions about cheating on emissions tests and mileage data. A Wall Street Journal story this week says the president of Mitsubishi would resign now that the company is admitted to overstating mileage on some vehicles. Suzuki has also admitted to fudging tests. Mitsubishi was described as “an environment prone to breeding fraud existed despite years of trying to rebuild its reputation after multiple quality problems over the last 16 years.”

– It appears GM is now part of the “cheating on data” story. Reuters reports that the automaker is “expected to announce plans to compensate about 130,000 individual US owners of SUVs that had inflated fuel economy labels.” The report noted that GM Canada is expected to offer a similar compensation program.

– A recent accident on the Gardiner Expressway in Toronto literally ripped the engine from a car. You can see some of the aftermath in the photo above.

– A recent letter to the editor demanding the creation of a public insurance industry appeared in the Toronto Star this week. In part, the letter reads “The current auto insurance system in this province socializes cost and privatizes profits. Come June, the auto insurers slash benefits by 25 to 50 per cent and in return, we get 3 per cent cut in premiums. What a deal for the auto insurers!” You can read the rest at on.thestar.com/1WCAyjG.

– BMW’s iNext electric vehicle will be self-driving. It will arrive in 2021 as the brand’s flagship model according to a news report this week. “The new car is the centerpiece of BMW’s effort to defend its position in the luxury-car market from challengers such as Tesla Motors,” according to the report. The iNext will be “autonomous,” feature digital connectivity and “intelligent lightweight design.” The article also claimed that, “BMW is expanding into mobility services as owning a car becomes less important to city-dwelling consumers. The company started a car-sharing service in Seattle last month that offers the option of a chauffeur service as well as people renting out their own vehicles.” The trend that sees auto makers beginning to self-identify as “mobility providers” continues.