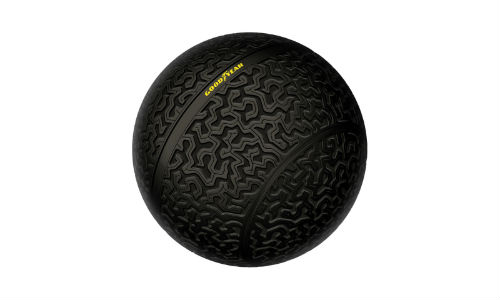 Toronto, Ontario — March 10, 2016 — It’s time for another Friday Fun, where we look at all the odds and ends from the week that was. This week we dig into what may be an upcoming recall announcement, goings on at the Geneva Motor Show and a look at Goodyear’s concept tires for robotic cars.

– Uh-oh. Media reports are claiming that the US-based National Highway Traffic Safety Administration (NHTSA) is investigating brake systems on 2013 and 2014 Ford F-150s. Apparently there have been four incidents in which the brake system has lost pressure. Drivers report the brake goes all the way to the floor when pushed and braking power is lost. The best selling car in North America is not yet subject to a recall, but the NHTSA is still investigating.

– At this year’s Geneva Motor Show, an executive from BMW talked about how their company was transitioning from being a car manufacturer to being a “mobility solutions provider.” What does that mean? Some car companies (including Ford) are getting ready to introduce a subscription service, whereby a monthly fee gets you access to a stream of vehicles that are constantly updated and replaced.

“Later this year we will introduce a future service system … a new mobility service is coming this year,” the executive was quoted as saying. The exec went on to say that car ownership is “definitely” moving towards “a subscription model like Netflix and Spotify, where a range of vehicles can be accessed for a flat fee, but not actually owned by the driver.” Ken Washington, VP of Research and Advanced Engineering at Ford, was also quoted as saying that a “Spotify-style” subscription model was in the works at his company. The company is also working on fully autonomous shuttles that he described as vehicles that “fit somewhere between a private taxi and a public bus.” The BMW exec talked about future cars from that company being your “cockpit to the Internet of Everything.”

– Maybe millennials are going to buy cars after all. This was once something of a source panic in the auto industry: the millennial generation did not seem to be taking up the car driving habit like previous generations. They weren’t getting driver’s licenses and were putting their cash towards smart phones and data plans instead. They were also using services like Zipcar instead of buying their own vehicles. But the latest data suggests the millennials are taking up the car driving habit, just a bit later than previous generations. Millennials bought four million cars and trucks last year. The only group that purchases more vehicles were baby boomers, according to numbers from J.D. Power.

– Art in an autobody shop? Sure, why not. At Cal State Northridge, the art department started a collaboration with the technology department that would place a professional artist in the facilities of the school’s technology division. Last year Beatriz Cortez, a visual artist was chosen to be a part of the program and was embedded in the autobody program to work with sheet metal and autobody paint. The installation project that came of that experience was put on display this week at the college. Her piece, the Black Mirror, is meant to “assert that vocational skills are not only used to get a job but can be used to express one’s self in the same way an artist might.” Nice!

– Volvo is calling for the car industry to develop a standard for charging electric vehicles, and has joined the Charging Interface Initiative, a consortium of stakeholders dedicated to establishing a standard for charging battery-powered cars. Volvo is working toward offering a plug-in hybrid variant on every new model it makes. It will introduce a fully electric vehicle by 2019 based on its “modular SPA vehicle architecture,” according to a report. “We see that a shift towards fully electric cars is already underway, as battery technology improves, costs fall and charging infrastructure is put in place,” said a company executive. “But while we are ready from a technology perspective, the charging infrastructure is not quite there yet. To really make range anxiety a thing of the past, a globally standardised charging system is sorely needed.”

– A list of the top 10 modifications that will increase your insurance premium, courtesy of MoneySuperMarket:

6. Changes to the paintwork: 36 percent increase.

– Bond rating firm Fitch has released a report saying the motor insurance industry faces a “significant shake-up” from the growing usage of telematics or vehicle-monitoring systems. According to a report, “Telematics systems are expected to have a big impact on the insurance industry for at least the next five years.” In the UK the number of telematics based policies sold in a year doubled. These policies involve the use of equipment to monitor driving behaviour, allowing the insurance company to more closely monitor the risks posed by an individual policyholder. The more data-intensive method of measuring risk would replace “traditional pricing factors like age, postcode and type of car.” The report notes that “Early evidence suggests that the lower premiums on these policies are more than offset by cost savings due to better risk selection and better driving behaviour by policyholders with telematics,” according to Fitch Ratings.

– A British Columbia judge has awarded a woman who “experienced the wrath” of the province’s insurance corporation nearly $400,000 in damages. Supreme Court Justice Susan Griffin said in a written decision released Wednesday that “the Insurance Corporation of British Columbia and one of its investigators are liable for malicious prosecution, and that their conduct in the case was high-handed and reprehensible.”

The case involves two refugees from Yugoslavia who were hit by a car. One did not speak English and needed a translator. It was not made clear in the interview if the person had been hit by the car or her falling husband. The miscommunication resulted in a charge of making a false statement. The judge wrote in her decision that “John Gould, the ICBC investigator in the case, wrote a misleading report to Crown counsel recommending the charge, intending to dissuade civil claims against the insurance agency.” The judge wrote that Gould, a former police officer, “cherry-picked” evidence for the report.

The judge also noted that Gould “encouraged other agencies, such as the health and immigration ministries, to take action against the woman,” even though she was vulnerable by being so new to Canada and unable to speak English. “Mr. Gould pursued Mrs. Arsenovski with a vengeance that was significantly out of proportion with any objectively reasonable concern he could have had as to whether or not she actually might make a claim,” Griffin wrote.

– Goodyear is displaying concept tires for self-driving cars at this year’s Geneva Motor Show in Switzerland. The new wheels for autonomous vehicles (AVs) could be available as early as 2020. The concept tires are spherical, rather than circular, but that’s not the craziest thing about them. They’re attached to the car magnetically. That’s it. Just magnetism. There’s no physical connection at all.

According to a press release, the “Eagle-360 tires would be attached to the vehicle via a system of magnets. This allows passengers to float smoothly over the wheels.” The smart wheels “could pick up different road surfaces and weather conditions, which would provide a safer robotic car ride. For example, the tire concepts’ 3D-printed tread can harden on dry roads and soften on wet surfaces.” The smart tires would also include built-in sensors to communicate with the car’s internal systems and nearby vehicles.

– The Indiana state legislature almost passed a bill that would have forced Tesla to work with a franchise in the state to sell vehicles there. The precedent could have locked Tesla into adopting a dealership-based car sales system, which is something the company is hoping to avoid (the company sells direct to clients right now). Tesla sent out an emergency email to local residents asking for help protesting the bill. Lawmakers backed down in the end. The email read, in part, “Don’t let GM tell you that your only option is to buy a car from a traditional franchised dealer by shutting out Tesla.”