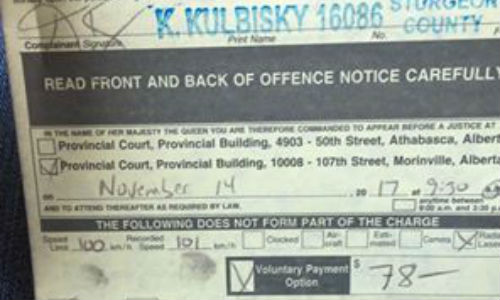 Toronto, Ontario — September 21, 2017 — In this week’s edition of Friday Fun, Ontario proposes a $50,000 fine for distracted driving, how an Alberta man got a ticket for driving one kilometre over the posted limit, new fast-response teams for Toronto highway accidents, and much, much more!

– Weeks after a gang of motorcyclists took over Toronto streets the police have finally charged some of those responsible. At the time the police were, arguably, unable to shut down a mass ride by a group of bikers that took over the expressways of Toronto in early August. The group stalled traffic around the city as they did tricks on the main highways over the course of an afternoon. Police received numerous complaints about, “… dozens of riders driving aggressively and coming to a full stop on highways to perform various stunts and wheelies. The OPP appealed to anyone with dash cam videos or photographs of the motorcyclists to turn them over to help officers identify them.”

The latest charges come after a couple of similar incidents. According to the Toronto Star, “Provincial police had laid charges in March following similar incidents on Toronto-area highways in 2016. A man died on July 23, 2016 when he collided with a transport truck as a group of motorcyclists travelling together on Highway 401 slowed traffic while performing stunts. A group of motorcyclists also slowed traffic and performed stunts on Highway 427 on Sept. 22, 2016. Police seized four motorcycles and arrested five people after that incident.”

– A report by Canadian Underwriter notes that Canadian lawmakers are debating a bill that would give the Transport Minister the power to “order a company to correct a defect or non-compliance in a vehicle or equipment … ‘If a situation arose today with a vehicle, tire, or child seat where there was clear evidence that the product contained a safety defect that could put the safety of Canadians in jeopardy and the company did not agree and was not voluntarily issuing a recall, there would be little that could be done except to take the company to court,’” the Transport Minister was quoted as saying in the House of Commons. This was the second reading for Bill S-2, which passed in the Senate in February. As it is, the law “only obliges manufacturers to issue notices of defect, but does not oblige them to take any further steps,” according to the report.

According to a report by the Globe & Mail, “Upon conviction, the charge would carry a fine of between $2,000 and $50,000, up to two years in jail and a licence suspension of up to five years. Under the current Act, careless motorists who kill someone can be fined a maximum of $2,000, jailed six months and lose their licence for two years. In practice, lawyers and safety advocates say, these drivers are rarely fined more than $1,000 and almost never jailed.”

The story also says that, “… while fatalities are dropping among motorists, who are increasingly protected by well-engineered vehicles, pedestrians and cyclists are forming a bigger share of the casualties.”

According to the Ontario government, distracted driving is, “… causing twice as many collisions as it did in 2000.”

– Another chunk of new driving regulations about to hit Torontonians comes from Mayor John Tory, according to a report by Newstalk 1010. He announced this week that the province has agreed to make the necessary changes under the Highway Traffic Act that will authorize, “… officers other than police to manage pedestrian and car traffic on city streets, and, if needed, around construction sites. For years, critics, including the mayor, have questioned why highly paid and trained police officers should receive lucrative paid-duty assignments to direct traffic.”

– Another new initiative announced this week: Toronto will also create two “quick-clear squads” that will monitor traffic lanes along key downtown highways (the Gardiner Expressway and Don Valley Parkway) to make sure they are not blocked and backing up traffic. According to a report by the Toronto Star, the city’s traffic operation centre will dispatch the teams, “… to locations where there are reports of lanes being blocked. ‘We will have these two squads that will be watching for cars that are blocking these lanes, often times because of a collision, or because of stalled cars, and get them out of there, so they don’t block the traffic,’ Tory said.”

– The National Post reported on an Alberta man who is, “… shaking his head after a peace officer gave him a ticket for driving one kilometre over the speed limit.” The driver says he was nabbed last Friday in his Jeep for, “… driving 101 kilometres in a 100-kilometre zone just north of Edmonton … The father of two boys said he was pulled over after passing the Sturgeon County officer, who was driving below the speed limit … The officer wrote out the ticket after accusing Gagne of disrespecting him by passing his vehicle, he said. ‘It was my right to pass the officer. When I completed the pass, he turned his lights on. I pulled over and he came up to me and the first thing he said was ‘That was pretty ballsy of you, He said that was disrespectful.” Police have since apologized.

– Better late than never? At a time when other countries are already well into the diesel emissions scandal, investigators for Ontario’s Ministry of the Environment and Climate Change raided the headquarters of Volkswagen Canada this week, according to a report by the National Post. According to the report, “A team of 24 officers, including computer experts from the Ministry of Finance, arrived at the Volkswagen Canada campus in Toronto’s eastern suburbs at 9:30 a.m., seeking evidence to support a newly laid charge against Volkswagen AG, the automaker’s German parent company, for violating Ontario’s Environmental Protection Act … Volkswagen Canada’s Manager of Public Relations said the investigators came unannounced, and that the company is co-operating. ‘We’ll continue to co-operate with them until they have the information they require,’ he said. He said he did not know if they had taken anything yet. ‘This kind of came out of the blue for us,’ he said. ‘As such, it’s not something we find worrisome or troubling. We’re not hiding anything,’ he said. The report notes, “The raid comes two years and a day after a global emissions scandal involving several Volkswagen models erupted … In September 2015, the US Environmental Protection Agency announced it had evidence that millions of Volkswagen vehicles were programmed to detect when emissions were being tested, and to alter their engine function to reduce nitrogen oxide emissions during the test. In some cases, the regular emission rate was 40 times higher than in test mode … The company has already pleaded guilty to criminal charges in the United States, and was ordered to pay a US$2.8-billion fine.”