Digital connected cars and the recycler 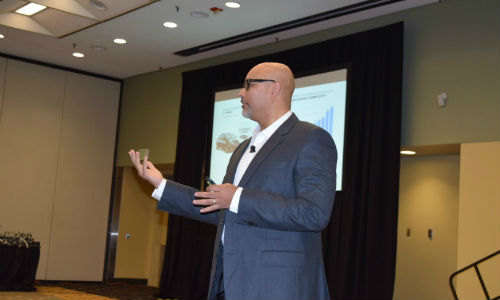 Dallas, Texas — December 21, 2016 — We’re used to change in the automotive recycling industry, but everything we’ve seen indicates that the rate of change itself is accelerating. Even a brief overview of some of the most obvious trends will show this to be the case.

There will be more than 200 electric and hybrid vehicles launched within the next three years. Autonomous vehicles are coming. Tesla’s cars alone have driven more than 47 million miles in Autopilot mode. There are new parts that are either on your shelves right now or that will be there soon. This includes relatively simple items like xenon headlights, but it also includes an enormous number of electronic components that recyclers have never really had to deal with: sensors, proximity detectors, an enormous range of computers and radar and lidar systems.

Where is the automotive recycling industry headed? Ladies and gentlemen, fasten your seatbelts, because wherever we’re going, we’re going there fast!

The average new car now has more than 80 microcontrollers embedded within it. Some of these are recording data, but there’s an increasing trend towards transmitting that data directly to concerned parties.

Telematics is not itself new, but the number of vehicles being sold with connectivity built in has increased exponentially in the last few years.

A car that has OEM gateway connectivity feeds information directly from the vehicle to the OEM. This data is extremely valuable to the OEM itself, and to insurers and the repair sector.

The percentage of vehicles sold in the US that feature OEM gateway connectivity was around 0.4 percent in 2013. It’s since climbed to 7.8 percent in 2016. That’s a big climb in just a few years, but it isn’t done. Projections of this trend indicate that the percentage will rise to 53.3 percent by 2020 and will continue to rise. By 2031, projections indicate that 96.3 percent of new cars sold will possess OEM gateway connectivity.

Let me assure you, this information will be put to use. Looking at insurance, we can expect to see somewhere between 60 and 120 million usage-based insurance policies by 2020, a growth rate of between 60 and 70 percent. For repairers, this wealth of data has numerous benefits. In addition to receiving a first-notice-of-lose within minutes or second, they’ll be able to determine a total loss nearly immediately. The decision will be largely automated, thanks to the enormous amount of data that the systems will be able to draw on.

This has advantages, certainly, but it’s also disruptive to the industries concerned, and that includes automotive recycling. We’re going to see things change, rapidly, whether we are prepared for that change or not.

Big data and the growth of telematics are an important factor, but far from the only thing we must consider. We’ve also seen a veritable explosion of advanced driver assistance systems (ADAS). Many of you may have some of this technology in your car right now, including adaptive cruise control, lane departure assist, limited self-driving capabilities such as Tesla’s Autopilot, blind spot monitoring /assist, park assist, 360-degree sensors, reverse camera and sensors and brake assist systems.

All of these systems complicate the job for auto recyclers, but there are opportunities here as well.

Let’s look at what’s helping to drive those opportunities. The average age of vehicles in North America is at a record high. In the US, the average passenger car is about 11.5 years old. The OEMs have focused on improving reliability of their vehicles. In 2002, about 8 million vehicles in the US fleet were at least 25 years old. Today, about 14 million are that age or older. An additional 44 million vehicles are between 16 and 24 years old.

The demand for recycled parts will likely increase as the average age of the vehicle fleet grows.

Collision shops have long been one of the key markets for recycled parts. There are three trends that will likely continue to make this a strong market for recyclers. First, severity is rising, meaning higher repair bills. Second, consolidation is up. This means less competition in one way, but it also means that the competition between the largest operators will heat up. Third, direct repair programs are very popular with repairers for obvious reasons. In turn, this means many shops will listen to insurer recommendations about which parts to use, and very often that recommendation will be to use recycled OEM parts.

There are some downsides to putting too many eggs into the collision basket. The amount of dollars spent on recycled parts as a percentage of the total claim has been relatively flat in recent years. The supply of OEM surplus and remanufactured/reconditioned parts is growing. In addition, we’ve seen a rise in the export of salvage total loss vehicles to other countries, which decreases the supply for recycles and increases the prices.

The mechanical side of the aisle, however, has negligible recycled parts use historically. This also means a huge opportunity to increase sales to this $64 billion market. Engines and transmissions are extremely expensive to purchase new. A recycled part here can save the mechanics and their customers significant amounts of money.

Looking at the consumers, our data indicates that they split into two main groups. There are the “do-it-yourself” (DIY) people, comprising about 20 percent of the market. The other side of the coin are the people who prefer a “do it for me” (DIFM) approach. The DIFM like the cost savings from recycled parts, but don’t have the skills, tools or time to install them. The really bright part of this picture is that about 70 percent of the DIFM market prefers aftermarket shops over the dealership. This is an opportunity to sell recycled OEM.

Finally, there’s eCommerce. Many recyclers are already in this arena. For those of you who are not, I say do not wait. This market is set to explode. We predict it’s going to grow from about $6 billion a year to $30 billion a year by 2023.

Turning back to insurance for a moment, there are enormous pressures on insurers right now to contain costs. Just looking at the US, 2015 represented the highest auto claim volumes since before the recession. The improved economy has fueled new car sales. In turn, this increases the number of insured vehicles, additional coverage, miles driven and the propensity for a consumer to choose insurance paid repairs.

The technology is impacting the auto insurance industry as well. The newer and more technologically advanced a car is, the more it’s going to cost to repair in the event of an accident. It’s simple, but it’s also lead to the worst results for auto insurance in the last 14 years.

It’s bad news for insurers, but good news for automotive recyclers. The single biggest opportunity for insurers to control those claims costs is through the effective use of alternative parts.

The increasing complexity of vehicles is also good news for automotive recyclers. We’re seeing fewer repairs and more component replacement. Inflation has increased parts costs by 4.7 percent year over year. This is at the same time as the replaced part count continues to rise in step with the increasing complexity of vehicles. We’ve seen an increase in part counts of 0.6 year over year. That may not sound like much, but it adds up quickly.

What should recyclers do to weather the trouble and seize new opportunities as they become available? The answer lies in one word: evolve.

There are four different areas where recyclers can evolve and realize benefits. The first is technology. Take advantage of the data and analytics that are becoming available. Apply all the data you can to the way you do business. Look at the new part types that will be needed in the near future, like sensors and radar systems, and determine how you can offer these to your customers.

The second is training. You will need a tech savvy workforce who knows how to deal with these new electronics. You’ll also need staff with mechanical skills if you want to increase your market share for those parts.

The third is eCommerce. We must expand the reach you already have to reach more of the DIY and DIFM customers, rather than just the professionals at the body shop.

Finally, I’d like to take a bit of time to discuss Solera’s InPart Network, and why you should be a part of it. In brief, it’s deployed across 34 of the top insurers and that number is rising. Over $4 billion of the alternative parts quoted annually go through InPart. It’s also integrated with Hollander’s EDEN Network and offers seamless integration with Powerlink for body shop procurement. Auto recyclers using it can also inventory and catalogue additional parts through the Hollander interchange and provide all catalogued inventory to InPart APU PartsNetwork.

Additionally, InPart integration into the Audatex Estimating software, along with additional estimating software and direct internet access, can provide your inventory, in real time, to staff appraisers and DRP shops, potentially increasing the sale. Customers who use APU PartsNetwork have shown positive increases in recycled parts use. In fact, some of them literally doubled their recycled parts use prior to what it was before using APU.

Save the Date: ARAAC 2022 Convention returns to Truro, Nova Scotia