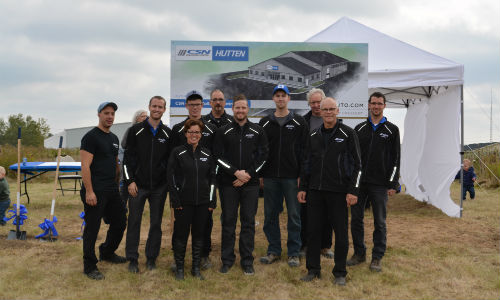 Fergus, Ontario — October 23, 2015 — John Hutten says it was a desire to be “bigger, better, more efficient” that lay behind a recent decision to erect a new building that will house CSN-Hutten Collision Centre in Fergus, Ontario. Hutten, the facility’s owner, made the comment at a sod-turning ceremony at the site of a new 10,700 sq.ft. building.

The new site consists of two acres of land, situated on Glengarry Crescent in Fergus’s industrial area. Collision Repair magazine spoke with owner John Hutten about his decision to erect the new building.

“There are a number of reasons, but number one is that we wanted to create a designated area for aluminum repair,” he says. “The F-150s are aluminum, and we’re in a rural area. We see a lot of those trucks.”

Hutten started the business in 1983 in partnership with his brother Albert. At the time, they had just one bay. The company relocated to a three-unit building on St. David St. North in Fergus in 1999. At that time, they occupied just one unit. Over the years, CSN-Hutten Collision Centre took over all three units. However, the building is not suitable for further expansion.

“We’re right in town and there’s a lack of parking. It’s an older building and it’s simply not designed for collision repair,” says Hutten.

It isn’t just efficiency and the need for aluminum repair that prompted the move. Improving the work environment was also a consideration.

“We’re really gearing towards being an employer of choice,” says Hutten. “We’re going to give our techs a nice facility and a clean environment to work in. We’ve got a Eurovac central vacuum system to help manage air quality and we’re installing LED lighting.”