Anne Kang, the minister of advanced education and skills training, says that it’s an important step to give credit to tradespeople for the work they do every day.

“Similar to a post-secondary degree, a certified trades worker has a certification that is recognized by employers just like teachers, lab techs, nurses and other certified workers,” said Kang. “By recognizing the worker’s skill, we will attract more people into careers in the trades in order to help address labour shortages across a variety of trades.”

The certification system will be in phases, and the first phase will start with the 10 jobs that are in the most need of workers. This includes the following trades: autobody and collision technician, automatic technician, heavy-duty equipment technician, gasfitter, steamfitter and pipefitter, sheet metal worker, electrician, powerline electrician, industrial electrician, and refrigeration and air conditioning mechanic.

Premier John Horgan says that this change will help the province bounce back from a difficult year due to the pandemic. “Tradespeople are building British Columbia and we need to value that work. We need to encourage younger people to enter the trades and we need to return tradespeople to the place where they can have family-supporting jobs because of certification,” he said.

Owner operator Victor Law has been in the automotive business for over 25 years. He got his start operating a gas station that also housed a mechanic shop in Vancouver. In 2005 Law opened a full-scale auto centre in Richmond. The recent decision to join forces with NOVUS Glass comes because of the growing regional demand for quality glass repair services, as well as Law’s personal goal of incorporating all automotive-related services in-house.

“The next logical step was to include automotive glass repair in our service offering. Most often, collisions involve significant damage to windshields and other automotive glass parts. By incorporating it in our services, we have better control over the complete repair of the vehicle and can reduce our response time,” Law said.

With this amalgamation, Victor was able to upgrade the equipment at his facility as well as train his technicians in the latest automotive glass technology. Along with a state-of-the-art shop, Victor now operates a fully equipped NOVUS Glass mobile unit that is prepared to handle any repair or replacement needs customers may have wherever they are. 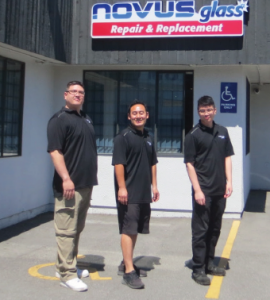 ALL IS FAIR IN ICBC

In a press release, the provincial government announced that Michael Skinner, a former lawyer, is now the new fairness officer for the Insurance Corporation of British Columbia (ICBC).

The fairness officer role is a new position that started on July 12 and will run for a term of three years. The role will allow Skinner to resolve customer complaints and make changes to ICBC’s policy that he sees fit. In the press release it says Skinner will be involved in creating a better experience for the public.

“The appointment emphasizes the independence of this new office. He will focus on ensuring the corporation’s policies, practices and actions are fair and transparent, while further strengthening public trust in ICBC as an organization dedicated to providing affordable auto insurance and caring for people who are injured in a crash.”

A large reason why Skinner was chosen for the role was because of his work experience as a lawyer and later as an investigator for the Office of the Ombudsperson and the Office of the Information and Privacy Commissioner. “These roles shaped his expertise on multi-party dispute resolution, complex investigations and major public reporting with recommendations for systemic improvement.”