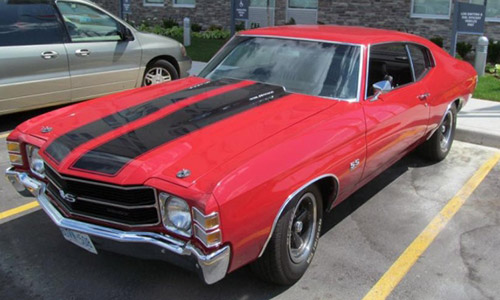 Beginning back in March, five highly-valuable and treasured vehicles have been stolen from a collection of homes and businesses in the Golden Horseshoe region, prompting police to investigate the issue. Though many locals have taken to social media with their theories on the spate of robberies – including one outlandish idea that someone was playing out a real-life version of the popular year 2000 movie Gone in 60 Seconds – Thomas Manney of Niagara Regional Police told media there was nothing to indicate the incidents are related.

“There’s no commonality to link any of these vehicles right now,” Manney said.

Those words are not likely to do anything to console the distraught owners of the vehicles, several of whom have spent more than just money fixing up their old-school rides.

Shawn Marcoux had owned his 1971 Chevrolet Chevelle SS since he was a 15-year-old boy. Following more than 13-years of tinkering with the vehicle behind closed doors, he unveiled it to his family and friends when it featured as a centrepiece of his wedding in 2008. It was stolen from the parking lot of a Niagara-region golf course on August 4.

Though the Chevelle was said to be worth in the region of $30,000, insurance money cannot replace the memories the car created. Marcoux told media the vehicle was the fourth most important thing in his life, coming in right after his wife and two children.

“It’s one of my greatest accomplishments because I just didn’t quit on it,” Marcoux said. “When the cops came, I told them ‘the only thing worse I could be giving you right now is a description of my kids.’”

A mint 1969 Chevrolet Camaro worth over $100,000 was stolen from rural Welland on March 4, while a rare 1950 Buick Sedanette was taken from a property in Smithville on April 20. Police followed up on reports of another robbery on June 14, this time in Niagara Falls after a 1976 Chevrolet Corvette went missing from Niagara River Parkway, while the fifth and final theft was said to have taken place sometime between August 19 and 24 when a 1980 GMC Caballero was plucked from an estate in Oakville.

Thieves looking to make a quick buck may be out of luck, though, after Manney told media it can be difficult to unload one-of-a-kind vintage models, such is the “togetherness” of the classic car community in southern Ontario. He did however stop short of offering a reprieve to the beleaguered owners, admitting it was “relatively rare” for police to recover cars like these after they’ve been stolen.

“Someone could recognize (one of the cars) quickly,” Manney said. “(Unfortunately) what we could see happen is a car sit in storage for several years until someone thinks it’s not hot anymore. If all of this was the same person, they wouldn’t be keeping them out in the open. Odds are they would be hidden.”