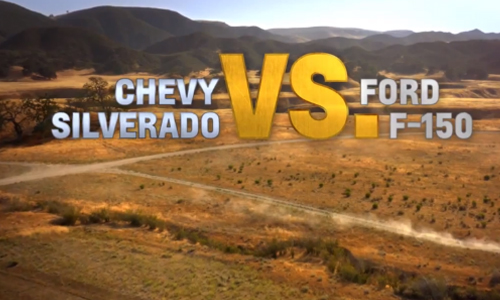 Toronto, Ontario — July 7, 2015 — The gloves are off. Chevrolet’s summer truck marketing campaign is pulling no punches, and the new aluminum Ford F-150 is the target of some very funny commercials that play on the supposed strength of the all-steel Silverado.

Is the decision by Ford to go aluminum starting to backfire? Chevy is going for the jugular with its new ads, and with good reason. The most recent sales figures suggest Ford may have an issue on its hands. The Globe and Mail reported on July 2 that June sales figures saw General Motors Co., Fiat Chrysler Automobiles NV and Toyota Motor Corp. all post higher Canadian sales for the month. The strong sales were “bolstered by healthy demand for their pickup trucks,” but Ford Motor Co.’s pickup sales fell, “hurting its monthly results,” according to the Globe. Ford said its Canadian sales fell 13 percent to 26,784 vehicles.

Chevy just released the three ads this morning. They can be found at chevrolet.com/silverado-films.html. The ads are interesting in that they target a specific product of the Big Three’s product in a very direct manner. Has one of the Big Three ever targeted another product of another OEM in such a specific manner? We can’t think of an example.

In the first of the new ads, titled Cages, “real people, not actors” are in a room identified as a materials testing facility. Two cages are in the room. One is made of steel. The other is made out of aluminum. To make the point (unsubtly) a 700-pound Grizzly bear is released into the room. The actors are asked to pick what cage they want to go into to be saved from the bear. No one is surprised when the panicked people pick the steel cage.

In the second spot, former NFL player Howie Long interviews a Chevrolet engineer about the differences between steel and aluminum. The engineer points out that the new aluminum Ford F-150 will take longer to repair and will be more expensive to fix. To make the point, the engineer explains how Chevy took four Silverados and four F-150s and damaged them in a specific way. Chevy created body damage like that which might be left if a large truck had backed into the vehicles on a job site. The eight vehicles are then sent off to certified collision repair centres to be fixed. It may be worth noting that the F-150s were sent to centres certified for repairs to those trucks. Long ends the commercial by highlighting the higher cost and longer time it takes to fix the aluminum body of the new Ford F-150.

The ads, very directly, play up consumer perceptions around the relative strength of steel versus aluminum car bodies. Clearly, Chevy thinks they can play on fears and worries consumers might have about aluminum. And they are not afraid to work those concerns and issues into summer marketing campaign.

The third spot is the most humourous. A group of Comic Con-attending fans are taking part in a focus group. They are asked about a new super hero a comic book company is creating called “Aluminum Man.” The fans are asked what they think of the new superhero. They go on to discuss the pros and cons of a superhero made out of aluminum. To no one’s surprise the character is seen as lacking in durability and strength. “The people who made this character…do they even know science?” asks one of the actors. “If I’m ever in danger I’m not calling aluminum man. I’m calling Zinc Man,” says another.

What is most interesting here is that Chevy is not holding back in its criticism of the new aluminum Ford F-150. Clearly Chevy thinks the company can exploit consumer fears around the new F-150 and its aluminum body panels. You can see the commercial regarding repair times in the player below.