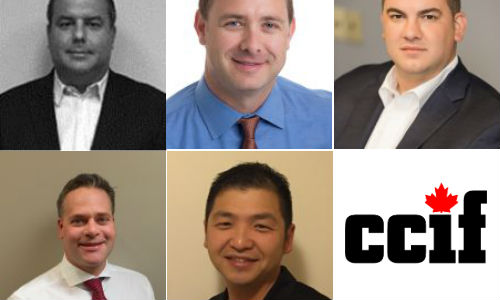 Ottawa, Ontario — September 14, 2016 — The next meeting of the Canadian Collision Industry Forum (CCIF) will feature a panel discussion with panelists drawn from both insurance and repair sides of the auto claims economy.

The next CCIF meeting takes place September 29 to 30 at the Vancouver Marriott Pinnacle Downtown, in Vancouver, British Columbia.
CCIF Chairman Joe Carvalho will moderate the panel discussion. Confirmed panelists include Tony Sutero-Sardo of RSA and Christopher Hancock of the Insurance Corporation of British Columbia (ICBC) on the insurance side. Representing repairers are Rick Hatswell of Craftsman Collision, Derek Chao of AutoMind Collision and Steve Leal of Fix Auto. The topics discussed will focus on industry trends and the future of collision repair.

Tony Sutera-Sardo is National Vendor Manager APD for RSA Insurance. He joined the company in 1999 and has over 25 years of industry experience. His background includes a number of roles in claims and automotive appraisal. Sutera-Sardo also has a technical background in autobody repair. He sits on a number of committee, including the GAA Technical Committee in Quebec and the CCIF Steering Committee.

Christopher Hancock is the Manager, Strategic Supply Management – Material Damage for ICBC.  His career in the automotive world started in the service department of a large auto dealership. He joined ICBC in 1993 as an estimator and has occupied increasingly senior roles in the organization since that time.

Derek Chao is Director of Operations for AutoMind Collision Group. He has been with the company for 16 years, beginning as a technician on the shop floor. He currently focuses on developing solutions to create a better, more efficient environment for the collision repair industry.

Steve Leal is the President of both Fix Auto Canada and Fix Auto World. Leal joined Fix Auto as a franchisee in 2004 when he purchased Fix Auto Cambridge. He negotiated Area Developer rights to Ontario and Atlantic Canada in 2008, followed by Alberta in 2009. He become Chief Operating Officer for Fix Auto Canada in 2011, and  became the largest shareholder and orchestrated the purchase of the rights to the Fix Auto brand worldwide in 2014. In 2015, Leal took majority control of both Fix Auto Canada and the global master franchise for Fix Auto World. Now with more than 430 collision repair facilities in Canada, the United States, the United Kingdom, France and Turkey, Fix Auto is a made-in-Canada success story.

The complete agenda for CCIF Vancouver is now available. For more information or to register, please visit ccif.ca.