CARSTAR rolls out with the Calgary Stampede 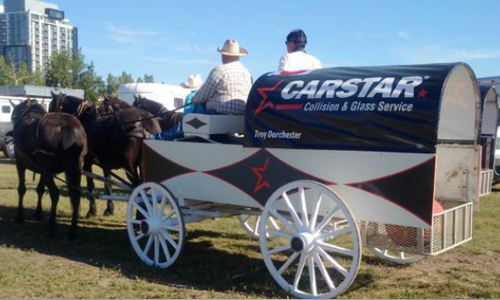 Hamilton, Ontario — July 6, 2015 — CARSTAR Automotive staff across Canada are donning the Stetsons and denims this week, celebrating CARSTAR’s partnership with the Calgary Stampede, taking place in Calgary, Alberta from July 3 to 12.

Building on the success of last year’s ‘CARSTAR Fastest Heat of the Night’ chuckwagon sponsorship, CARSTAR has entered into a multi-year agreement with the Stampede, granting them the exclusive CARSTAR Fastest Heat of the Night naming rights, on stage trophy presentations, five nights of VIP industry hosting, media opportunities and most importantly, a CARSTAR branded chuckwagon participating in nationally televised GMC Rangeland Derby.

This year’s CARSTAR chuckwagon is driven by veteran driver, Troy Dorchester – the only chuckwagon driver to have ever won chuckwagon racing’s “Triple Crown.”

“The Stampede partnership was a natural fit for us to be honest,” says CARSTAR President Michael Macaluso. “Our stores in Alberta have been performing at such a high level in recent years, we wanted to align ourselves with another leading brand. In Alberta, it doesn’t get much bigger or better than the Stampede.”
CARSTAR’s foray into the world of rodeo was spearheaded by CARSTAR’s Alberta Regional Development Manager Mike Piper who also acts as co-chair of the Calgary Stampede chuckwagon committee.
“The Stampede shares many of the same values as CARSTAR; especially in the community giving arena,” says Piper. “Many people don’t realize that the Stampede is a not-for-profit foundation and one of the biggest charitable contributors in Southern Alberta.”
On top of midways, rodeo and business hosting, the Calgary Stampede is committed to sustainability and animal care and firmly believes that this is where ‘The city meets the country,’ educating residents and visitors about the region’s dependence on agriculture and animal care.
In addition to the relationship with the Calgary Stampede, CARSTAR has recently forged valuable partnerships with leading entertainment properties in Alberta including the Calgary Flames, Edmonton Eskimos and Calgary Stampeders.
On these new partnerships, Macaluso adds, “Part of our marketing strategy is to align CARSTAR with other leading brands who demonstrate similar values to CARSTAR, whether charitable or otherwise. We aren’t interested in signs and logos so much, but rather we look for opportunities to offer experiences and to demonstrate not only what we do as a company; but who we are….we want to establish a relationship with our customers, before they need us.”
For more information, please visit carstar.ca.