Beetlemania: A History of the VW Beetle 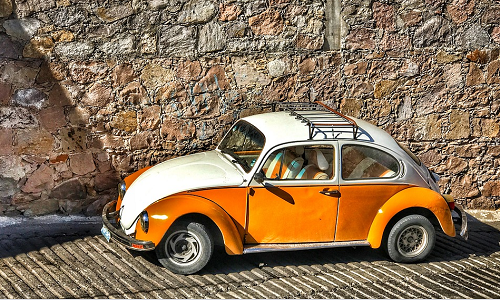 Toronto, Ontario — July 17, 2019 – Earlier this month, Volkswagen announced that they would no longer be producing Beetles after 81 years of production. Beginning as a symbol of dark nationalism and turning into a little vehicle that could, the Beetles Volkswagen has a long history of movement, makeovers, and movie production.  As the little bug approaches the end of it’s long and winding road, Collision Repair is here to provide a brief history of this iconic car.

The Birth of the Beetle

In 1938, the first Volkswagen was produced in Germany. Originally formulated by Adolf Hitler, the Beetle was designed to be the “people’s car” (translation: the volks wagen). The car was practical, affordable, and adorable however it wasn’t until the ’40s when Germany really wanted to stimulate their economy that the Beetle rolled onto the streets and into the hearts of many. At this time, it could only reach 62 km/ph.

In 1955, more than one million Beetles were on the road. It quickly became one of the fastest-selling cars on the market. The Beetle also became a sign of globalization as the popularity expanded across seas and suddenly every American housewife and hippie wanted this curvy car.

Beetles on the Big Screen

In 1968, the Beetle hit the big screens. The Love Bug, starring Dean Jones and Michele Lee was a Disney-made film about a race-car driver who befriends an animate Beetle named Herbie. The film helped cement the image of the car and add another element of joyfulness to the vehicle – just in time to become an iconic symbol for Woodstock. Since, there have been several adaptations of Herbie movies – all starring the happy little VW Beetle.

In 1978, the production of the Beetle halts in Germany, officially making the little bug and all-American vehicle. During this time, newer front-drive models were being created, changing the look of the Beetle while still keeping it’s iconic silhouette.

In 1998, the little bug got a big makeover.  A completely new retro version was built on a modified Golf platform and was called the “New Beetle.” While the redesign kept some of the “cutesiness” of the original bug, the new model was sleeker and much more practical for the average, on-the-go driver.

In 2019, production of the Beetle stops. According to Quartz magazine, “well-wishers gathered this week at VW’s Puebla factory to send off the Bug into the great beyond. A five-piece mariachi band paid tribute and Volkswagen de Mexico chief executive Steffen Reiche was nearly overcome with grief.” Although the little bug is rolling off the roads, the memory of the adorable car who could will forever live on.