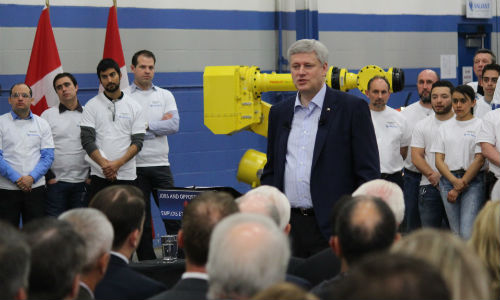 Windsor, Ontario — September 24, 2015 — The election campaign of 2015 is playing out. Politicians are starting to pile up the promises, and the Canadian auto industry is one sector getting some of the love.

This week Stephen Harper appeared in Windsor, Ontario. At a campaign stop he announced that if elected, he would devote $100 million in funds to help the auto manufacturing sector.

“Manufacturing has a bright future in Canada and we are going to transition into it,” Harper said to supporters. The new strategy will be known as the “manufacturing technology demonstration fund.” It would run over five years. Funds would not be made available until 2017-18. Critics were quick to pile onto Harper’s announcement, and protestors were on hand to speak out.

The area around Windsor has suffered as thousands of auto manufacturing jobs have disappeared. Local young people in the area are now more likely to work at lower-paying jobs in the casino rather than in a car plant or tool and die shop.

“I think it takes a lot of nerve to come down here after a decade of this city, off and on, being the number one unemployment capital of Canada,” one protestor told CBC. “The man says he’s created 1.3 million net new jobs. Well, where are they here? We had a plant here, GM, that had thousands of workers. It’s gone. Where was he then? Now he comes at election time to ask for our vote?”

“It’s shocking it’s so little,” Masse told the Windsor Star. “First of all, it doesn’t start for a couple of years and it’s up to $20 million dollars per year for the next five years, and they’ve already had numerous auto funds that have not gone out the door . . . They also tax on those fund which the auto industry does not want, and he’s also letting AUTO21 disappear.”

There has been a funding mechanism in place for auto manufacturing research known as AUTO21. The program has run for 14 years. Its funding mandate ran out this year. The Conservatives declined to fund it for another cycle. Masse reiterated an NDP campaign promise to reinstate funding for AUTO21 at the University of Windsor if elected.

Critics say Harper does not have a reputation as someone supportive of a manufacturing sector in Canada. He is negotiating a trade agreement during the election that could have a negative impact on North American parts makers. He has been intent on promoting free trade that generally sees union-friendly manufacturing jobs off-shored to more cost-effective jurisdictions like China. Most recently, Harper has attracted criticism for continuing to negotiate the Pacific Rim trade agreement even during this election campaign.

The proposed Trans-Pacific Partnership deal would unite 12 countries from Chile to Japan into a single free-trade zone and eclipse the North American free-trade agreement in importance. Talks are coming down to the wire, with the US and Japan making a final push to wrap up the accord next week in Atlanta. But Canadian and Mexican auto parts makers have been dismayed by the backroom deals being struck.

There is concern that the TPP would lower domestic content rules for vehicles and car parts, overriding rules in the NAFTA that have protected Canadian auto jobs for decades. Unifor, Canada’s largest private sector union, warns the deal would threaten more than 26,000 Canadian auto jobs.

Also weighing in against the deal this week were the leaders of the American Iron and Steel Institute (AISI), CANACERO (Mexico), and the Canadian Steel Producers Association (CSPA). The three groups have sent a letter to Ed Fast, Canadian Minister of International Trade of Canada, the Secretary of Economy of Mexico and Mike Froman, United States Trade Representative for the U.S., urging “a TPP that will strengthen the competitiveness of North American steel producers by enabling continued growth for motor vehicle component and finished vehicle manufacturers.”

Joseph Galimberti, President of the CSPA, says, “We are very much opposed to any measures in the TPP agreement which would undermine the long-term global competitiveness of Canadian steel-makers, and their customers.”

One interesting point from the Conservative announcement about the $100 million in funding is that one of the sectors that would be eligible for funds is the aluminium manufacturing sector. As the use of aluminums in auto manufacturing picks up, it makes sense for Canada to be on the cutting edge of this sector. The fund would make millions available to this sector in Canada.

Rio Tinto is currently updating its Kitimat aluminium smelter as a way of cashing in on the rising demand for the metal. Those in the aluminum sector see Canada making a play to be a major producer in this area. Canadian production is likely to overtake American production of aluminum this year.

American producers are being hit by rising electric costs and anti-pollution measures. Canadian producers benefit from having access to hydro-electric power to make aluminum, which requires vast amounts of electricity to produce. Canada is expected to produce 60 percent of North American light weight metal this year.