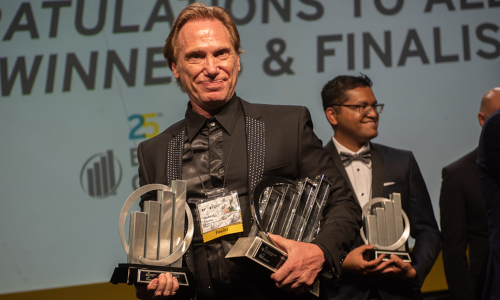 Halifax – November 5, 2018 –  Automotive entrepreneur Rob Steele is the winner of this year’s EY Entrepreneur of the Year 2018 award for the Atlantic region. Steele is chief executive officer of Steele Auto Group, a diversified group of automobile dealerships and collision repair facilities in Atlantic Canada, and Newfoundland Capital Corporation, one of Canada’s leading radio broadcasters.

“With a passion for the automotive industry, Rob purchased his first dealership nearly 30 years ago, where he began to build the relationships and business acumen that would set him up for long-term success,” says Gina Kinsman, EY Entrepreneur of the Year Atlantic program director. “Fast forward and now Steele Auto Group operates 34 dealerships, 27 brands and has an employee base of more than 1,500 people across Atlantic Canada.”

According to the company’s website, the Steele Auto Group operates five collision centres in Nova Scotia, and one in Fredericton.

“Leading one successful company — let alone two — is an amazing accomplishment,” says Kinsman. “Rob credits much of his success to having strong teams with skilled people in the right roles — a winning combination that’s proven there’s no limit to what’s achievable.”

Steele is also a strong believer in giving back to the community. Named Outstanding Individual Philanthropist of the Year in 2014 by the NS Association of Fundraising Professionals, he is involved in numerous charities, including the Alzheimer’s Society, the Mental Health Foundation, Family SOS, Daffodil House, Feed NS and the Arthritis Society, to name a few. He is also involved in and supports various community efforts, including Junior Achievement of NS and the ECMAs.

Steele’s entrepreneurial experience in the automotive industry prepared him to take on the role of president and CEO of Newfoundland Capital Corporation in 2002, where he later became chairman in 2018. Under his leadership, the business grew from 8 broadcast licenses in 2002 to more than 100 licenses today.

EY is a global leader in assurance, tax, transaction and advisory services. EY Entrepreneur of the Year is a business awards program for entrepreneurs. The program encourages entrepreneurial activity among those with potential and recognizes the contribution of people who inspire others with their vision, leadership and achievement.