A LESSON IN ATTITUDE

Building a business amid a pandemic

Long-time collision repairers Mike Cherneta and Kapi Komera were thrilled at the opportunity to own a CARSTAR facility together. The duo took the leap in January 2020, purchasing CARSTAR Mississauga 401 as well as two appraisal centres, CARSTAR Georgetown and CARSTAR Milton an addition for MGM AUTO Group.

The inaugural year for this new ownership team did not unfold as planned—but still the duo heeded on, optimism in tow, and made the best of the less-than-ideal situation.

MGM Auto Group co-owner Cherneta grew up in the industry; his dad was a technician and introduced him to the field. Starting as a detailer, Cherneta’s drive propelled him to continue working his way up through the ranks taking on various roles before opening his facility.

“I was living in the States and owned a bodyshop, but moved here as my wife is Canadian,” said Cherneta. “Eventually I found my way to CARSTAR St. Catharine’s in 2012 where I helped with business management, marketing and accounting. It was in 2013 when I met Kapi after he applied to be a detailer at CARSTAR St. Catharine’s.”

Although Komera was a French teacher at the time, he was looking for a part-time opportunity in the summer months and found the detailing position.

“Looking back, I never thought it would have snowballed into where I am today,” said Komera. “I’ve always loved cars and I slowly learned more and more through the years working my way into becoming a parts manager, estimator, office manager and then even production manager. My family and I moved to the Greater Toronto Area in 2019 and I applied to work for Sam Saccoia at his CARSTAR Mississauga Hawkestone facility because I did not want to commute anymore. I learned a lot from Sam in that short time and enjoyed working there, but then a chance at ownership came up and I was thrilled at the opportunity.”

Although the Peel Region has been a hotspot throughout this challenging near-two-years, Cherneta and Komera did not let the circumstances affect their drive. The team went to work. “It would have been easy for us to blame everything on the pandemic and say that’s why we’re not getting any cars, but it all comes down to performance,” comments Cherneta. “Rather than waiting for the environment to change, we changed. That would be my best advice to any other owners.”

The team rebuilt SOPs. They retaught the repair process. They reorganized the shop layout, using the 5S principles. They even used down days to build a training room as well as a parts room. They also redelegated duties by highlighting what everyone is responsible for and holding them accountable to their expected level of performance. 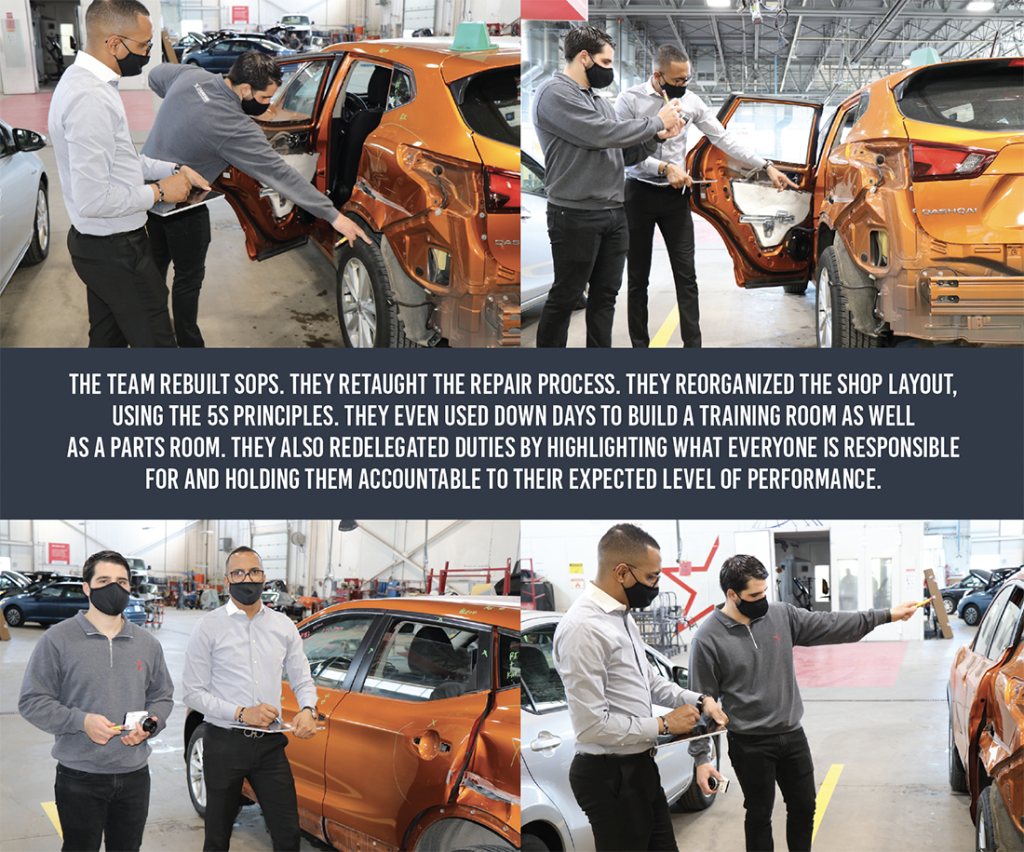 Komera and Petitti first broke ground as MSOs in January 2020. While they could never have known what the future would hold, the duo made the best of tough times and remained resilient through the pandemic—and it’s only made them stronger.

“Our focus moving forward is on performance, because we know how much the industry is changing and work isn’t owed to anybody, you have to show that you are a premier shop to win business,” comments Komera.“We essentially walked the walk by improving our KPIs. We boosted our NPS score to an 83 and got our LOR down to an average of 9.98 for both driveable and non-driveables, a big win for our shop which gets a lot of heavy hits.”

Both Cherneta and Komera credit their success in the past year to the support of their network. Whether it was from their operational coach at CARSTAR, Bill Davidge, their valued vendors like Axalta, 3M and Napa, their insurance partners or even their dealer partners like Georgetown Chevrolet, Georgetown VW, Milton Toyota and Milton Hyundai—the team listened intently to everyone’s feedback and implemented change throughout the facility.

“You are never too old to keep learning and we hustled to get as much input as we could into enhancing our facility,” continues Komera. “We also leveraged our newly built training room to provide space for education for us as owners, but more importantly for our team. We’re working towards various OEM certifications as well as an I-CAR Gold certification.”

Matt Petitti, office manager for Mississauga 401, has thrived in this environment of learning. Both Cherneta and Komera highlight how Petitti has been able to leverage his training to transform his role from being a firefighter putting out emergencies to a business manager driving the facility forward.

“Once we put out this positive attitude and committed ourselves to our performance, the rest of the team joined alongside us,” said Cherneta. “The entire culture of our facility changed this year, and we are grateful for the team we have now and the outstanding work they’re doing at our facility. It’s easy to be defeated in this environment, but we’re looking beyond just this year and excited to continue on this positive trajectory for years to come.”