The NACE Automechanika: The Takeaway 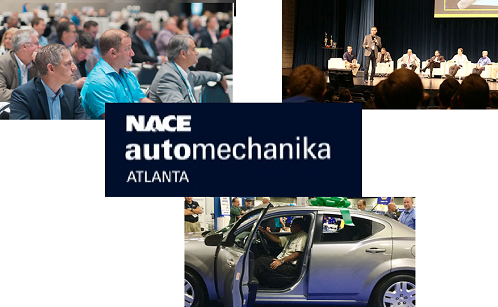 Atlanta Georgia — August 12, 2018 — Last Friday, this year’s NACE Automechanika event wrapped up in Atlanta, Georgia. Like many industry observers, CRM often views the event as something of an annual bookend on the state of the collision sector. The discussions that begin at NACE Automechanica tend to remain relevant throughout the year. The ones which don’t, well, they will rarely make a splash elsewhere.

This week, Collision Repair magazine will be breaking down the four-day event, which provided networking opportunities in abundance and some of the year’s most in-depth discussions and panels about the industry. In today’s piece, we have created a list of broad observations from the showroom floor. From the topics left untouched, to the new ideas that dominated the public forums and private discussions and the quirky trends sweeping the industy, here is the broadstrokes impressions of what our team garnered in Atlanta.

The Industry is Planning for Scanning

If one this was clear, it was that — at least in the U.S. — collision repairers have reached a consensus on the topic of pre- and post-scanning, and following OEM procedures. While not all do perform them regularly, those representatives of the industry who were in attendence were in widespread agreement that their religious use for all would be good for the industry. In the wake of a number of landmark legal cases in the U.S., the newfound agreement is hardly surprising. Whether Canadian repairers, untroubled by U.S. legal precedent, will be as agreeable about such a debate remains to be determined.

This is not to say that scanning, as an area of discussion, remains uncontroversial. From the CIC seminars on the first day, to the celebratory atmosphere of the final evening, defenders of pre- and post-scanning disagreed with one another on plenty of related points — from how to make sure insurers compensate shops to what third-party tools could be relied on to perform them.

No Time Talking About Certification

If the industry is coming together over the question of pre- and post-scanning, it is not exactly falling out over the question of OEM certification programs. In fact, most people at NACE Automechanika appeared to want to just agree to disagree. At the CIC conference, they were left almost unmentioned. Rather than rehashing old discussions, this allowed the organizers the time to highlight some cool, but out-of-the-blue ideas to get some airtime — like the collision repair wiki project (more on that later this week!). Even during the MSO Symposium, industry analyst and keynote speaker Vincent Roman’s decision to leave the matter of certification programs outside the main portion of his industry speech was recieved with looks of relief from several audience members.

Scan Tools Searching for their Spots

As previously indicated, much of the conversations within the various events at NACE Automechanika were focussed on pre- and post- scanning, and their company — and its services — were the point of comparison for ever booth presenter looking to demonstrate the effectiveness of their own scanning tools. Of course, with so many businesses entering the market space, the fight is on. Some tools aim to be the least expensive tool, others, the fastest, most comprehensive and up-to-date. Who will win? Who will die? The future appears hazy.

For our full coverage of the event, keep up with this e-zine all week. Check back tomorrow for our photo album and in-depth look at the week.