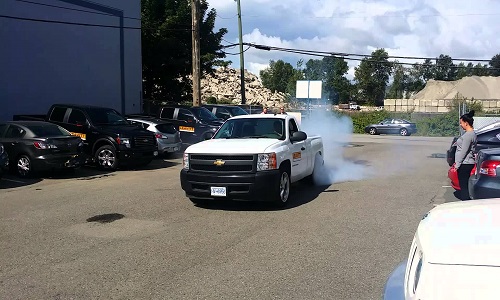 The folks at Leavitt Machinery in Kelowna, BC have taken fun at work to a whole new level. When Clayton Sartorius, Regional Service Manager for Leavitt, proposed schematics for an after hours team building project that involved customizing one of the company trucks, he never thought this would be the outcome.

The technicians at Leavitt had a Chevy truck donated to them by company vice president Mike Leavitt with instructions to “go nuts” and modify it as a team into a race vehicle. The team hit the ground running on this exciting project and in just under a year, a core group of 3-4 mechanics turned this ordinary 2008 Chevy short cab into a monster machine with a number of major modifications including a 5.7 litre Chevy big block engine and close to 1,000 hp.

Sartorius, the regional manager who oversaw this project and coordinated the proposal, now harbours the high performance truck in his garage and says that he even drives it into work from time-to-time. However the truck has served as more than a fun project for one Kelowna location.

When CRM asked ‘did it work’ as a team builder, Sartorius replied, “Still does!” stating that it is a great crowd pleaser for events and that the truck gets passed around to any of the 40 Leavitt locations across Canada, as mechanics are eager to add and modify the truck. “This has really served as a fun ongoing project for the whole company, not just one shop.” Said Sartorius.

“The main reason for the project in a nutshell was to promote a fun company culture. Many businesses talk about it, but we wanted to do something very clear and visible and also to have the employees own it. All labour on the project was donated by employees… The company bought the truck and all the parts and the employees contributed the ideas, the plan, the time, the design, etc.”