An interactive map published by British Columbia’s provincial insurer delves deep into the specific intersections on Vancouver Island where the most auto collisions occur—incidentally, also giving shop owners a good idea of where to invest in advertising. According to the Insurance Corporation of British Columbia’s data, which is as recent as April 2, Victoria’s most crash-prone intersection is the corner of Douglas and Finlayson Street, close to the city’s downtown core—hint, hint, downtown repair facilities. This particularly perilous corner has seen 244 crashes from 2017 to 2021. Up north in Nanaimo, crash frequency was slightly higher and more prevalent in areas with highway entrances and exits. Nanaimo’s most dangerous intersection is along the Island Highway at Rutherford and Mostar Road, at 265 crashes, followed by the Nanaimo Parkway at Aulds Road, at 236 crashes.In the more rural Port Alberni region, crash frequency was fairly evenly spread throughout the far reaches area, though the peak of crashes reached 92 in the city’s downtown core. 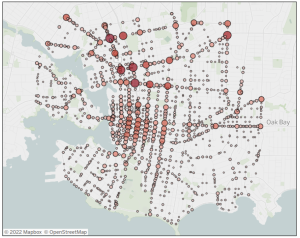 The ICBC data provides insights not simply for drivers to assess where the most dangerous intersections on the island are, but for repair facilities who may be looking to aim the services more directly they provide in their communities.

A new study from J.D. Power has found that despite the large amounts of money being poured into customer-facing websites and mobile apps by insurance companies, customer satisfaction with digital shopping is on the decline. The 2022 U.S. Insurance Digital Experience Study found that customer satisfaction fell 16 points from last year, bringing the total score to 499 out of a possible 1,000 points. J.D. Power attributed the decline to customer frustration with rising rates and the inability to find lower premiums through shopping for a new policy. It was found that the access traditional insurance companies have to human support systems is helping keep them competitive with purely digital insurance providers. The study evaluates digital consumer experiences among both property and casualty insurance shoppers seeking quotes and existing customers conducting typical policy-servicing activities.

Porsche owners now have the ability to opt into an insurance plan designed to cater specifically to their needs as the German automaker has officially launched Porsche Insurance in Canada. Customers who sign on to the OEM-affiliated insurance plan will be afforded a number of exclusive benefits, according to Porsche’s press release, including the guarantee that vehicle repairs will be completed by certified Porsche technicians and using official OEM replacement parts. As well, during the course of repairs Porsche Insurance customers will have access to a rental vehicle of comparable value and, in the event of a total loss or theft, be guaranteed a full return of the vehicle’s original purchase price.