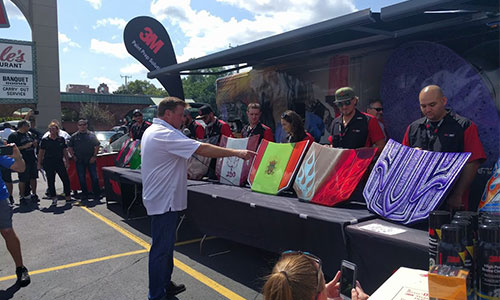 Detroit, Michigan — August 22, 2017 — The 3M PPS World Cup event continued in Detroit with the unveiling of the custom painted hoods during the Woodward Dream Cruise. The event brought together painters from around the world to paint custom hoods using 3M’s PPS Paint Preparation System technology. For more coverage of the event, please see “Painters unite at the 3M PPS World Cup in Detroit.”

As part of the celebration, 3M Automotive Aftermarket Division (AAD) invited 10 leading painters from around the world to illustrate their vision of classic car culture on a hood, using the 3M PPS System and other 3M automotive products.

Among the 10 painters were two Canadians: Justin Jimmo of Refinish Network and Consolidated Dealers in Ontario, as well as Carl-André Giroux of CAGiroux in Québec. Both painters drew inspiration from Canada’s 150th birthday to complement their designs.

“We hit a milestone up in Canada with our 150th anniversary. I decided to go with a modified flag with some carbon fibre on the sides, ghost flames and a hidden Model T in the middle,” said Justin Jimmo, while commenting on his design. Jimmo is also a regular contributor to Collision Repair magazine’s sister publication, Bodyworx Professional.

The hoods were unveiled during the famous Woodward Dream Cruise, where shop owners, custom gurus and classic car owners gathered to show off their cars, hot rods and custom creations. All of the painters were available for one-on-one discussions, photo sessions and autographs, as well as performing live demos throughout the day.

3M was on location with the 3M Demonstration and Education Mobile Operations (DEMO) trailer, to showcase the latest 3M solutions for automotive repair and maintenance with hands-on demonstrations for body repair, paint preparation, vehicle painting, paint finishing and vehicle appearance.

Also present during the event was auto legend Chip Foose. Foose signed autographs, gave a live tour of the Dream Cruise and also commented on each of the painters’ hoods during the unveiling.

“I think you all did a fantastic job, especially given the short amount of time in which you had to do it. We have some true artists here today,” said Foose while addressing the painters during the unveiling. Foose then proceeded to look at each hood to give his personal comments to the painters.

The hoods will be auctioned off for charity during the next SEMA Show this October in Las Vegas, Nevada.

“You can put me down for one hundred dollars on each of them, because that’s a deal,” exclaimed Foose.

Be sure to check out our gallery below for a closer look at the hoods as well as our Instagram page for more on this unique event! 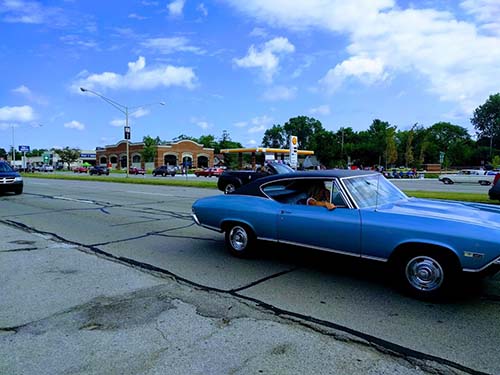