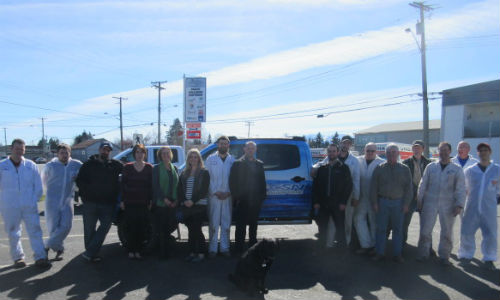 Courtenay, British Columbia — March 21, 2016 — Becoming a Toyota certified collision repair facility has its benefits, but Ryan Pederson says they might be even greater for body shops in smaller communities. Pederson is the Manager of CSN-Reliable Auto Body in Courtenay, BC. The autobody facility recently became a Toyota Certified Collision Centre.

“I think it will draw more attention to us just because there are so few shops,” he says. “We’ve been here since 1951 and it’s kind of a retirement community. So, a lot of people know us and we have a lot of return customers. I think it will help drive the younger generation towards us.”

Courtenay is a town of 25,000 people on Vancouver Island with only one Toyota dealership. So when CSN-Reliable Auto Body achieved its Toyota certification, the collision centre became the exclusive certified Toyota facility in town. Becoming part of an OEM certification program creates a partnership between the shop and the local dealership. Both businesses work cohesively.

“We are pretty much a partner with Toyota in the whole repair process. A lot of people will drop their vehicle off at the Toyota dealership and then we will arrange to get it down here,” he says. “So, we actually become an extension and a partner of the local Toyota dealership.”

\Pederson says CSN–Reliable Auto Body is also just the second shop on Vancouver Island to receive Toyota certification. He said it was natural progression for CSN–Reliable Auto Body, as Toyota’s business model matches the shop’s model. It’s also another step on the path of continuous training.

Four years ago, the entire production crew along with Pederson shut down the shop to attend AkzoNobel’s Process Centered Environment boot camp. Since then, the training has never stopped, says Pederson. “And we haven’t stopped trying to improve the way we do things since! Production, customer service, parts, vendors, everything,” he says.

To achieve certification, an audit was completed on CSN–Reliable Auto Body about a year ago. The audit goes over everything in the shop and focuses on details beyond the repair process.

“The audit was big, they go through everything. It’s not just, ‘do have these tools, do you have this,’” says Pederson. “It’s not just how you’re fixing the car, there’s housekeeping, your customer service, human resources, equipment, standard operating procedures and signage. All of that is involved.”