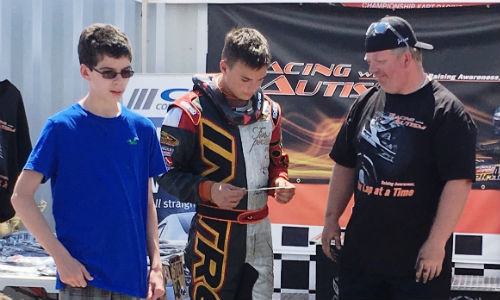 Moncton, New Brunswick — June 28, 2016 — You can always count on members of the collision repair industry to step up and help out when needed in the community. Recently, CSN–Dana’s Collision Center was proud to support autism awareness by sponsoring the 2nd Annual Racing with Autism event at East Coast Karting, in Moncton, New Brunswick.

The money raised helps support both autism awareness and kart racer Austin Riley. Riley, who is autistic himself, is also a three-time karting champion and a rising star in Canadian motorsports.

The event, held Father’s Day weekend, started off with a celebrity race Friday night as a fundraiser for autism awareness. Saturday was another day of racing for drivers to qualify for the CSN–Dana’s Collision Center sponsored Atlantic Championship event held Sunday at East Coast Karting.

Racers of from the ages of eight to eighteen competed in different divisions over the weekend. Stakes are high and everyone races to win. However, the drivers and teams also form a strong community that will always help each other in the event that something breaks, or if they just need a hand or advice in preparing their carts. It’s a widespread attitude that results in a real family atmosphere around the track.

Leading up to the Championship weekend, the drivers and their families sold puzzle pieces to raise funds. Including other events, a total of $4,100 was raised for Racing with Autism.

“Upon our arrival on Saturday I noticed every kart in every class had puzzle piece stickers on it. It seems for many weeks previous all of the competitors were selling these stickers to help raise money for Racing with Autism … I was left speechless,” said Jason Riley, Austin’s father.

This is the second year that Austin and his family have been at the Moncton facility. Last year, 12-year-old Nathan Goncalves, who is also autistic, came to see Austin race and was very inspired. This year Nathan came again to watch the races, and was very proud to present the cheque on behalf of East Coast Karting for $4,102 to Austin and his father. Money raised this year will help Austin race in the Autism Awareness Tour of Australia.