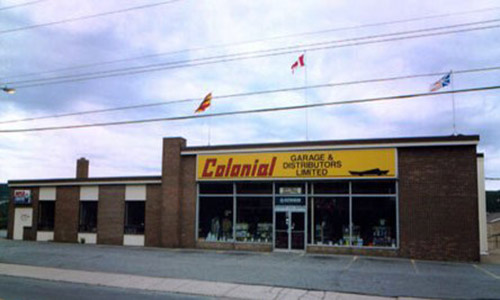 St. John’s, Newfoundland — August 2, 2016 — For the best part of a century, Colonial Auto Parts has served collision repairers all across Atlantic Canada. Later this year, the family-owned, third generation business will celebrate its 90th birthday.

Tracing its roots from its first location in St. John’s, Newfoundland, Colonial, alongside its sister company A.P.M. Ltd., has 20 locations across the eastern coast. Speaking to Collision Repair magazine earlier this week, company President and CEO Douglas Squires said he was “incredibly proud” to be able to celebrate what is a momentous milestone.

“This is a big year for Colonial and all of its employees and partners as there aren’t too many companies that can say they are still active after 90 years,” Squires said. “We’re still the same proud, family-owned company we always have been. It’s difficult to put into words just how much this anniversary means to us.”

Colonial Garage & Distributors started in 1926 outside of the growing city of St. John’s, Newfoundland as a service and gas station. Under the leadership of its founder, Gordon Elton, Colonial started to grow in the late 1940s by bringing in parts for repairs. In the 50s Colonial opened its machine shop and just a short time later expanded its parts importing to a parts distribution department – the company’s bread and butter as of 2016.

Colonial was incorporated in 1960 and from there the organization rose up at a rapid rate. With several operations running out of its primary site, and with Elton’s two sons’ G. Douglas and William taking on positions with the company, the decision was made to expand into additional markets.

Through the 70s and 80s, Colonial tapped into three new communities, Corner Brook and Grand Falls-Windsor in Newfoundland and Sydney, Nova Scotia. Described as “a bit of a gamble” by Squires, it was one that paid off handsomely, with those moves serving as the bedrock for further expansion in the coming years.

“Following the success of (those) stores, with technology advancing the way it was and roads improving at a pretty decent rate, the company really started to look into substantially expanding its presence across Atlantic Canada,” Squires said. “We were doing a lot of business by way of on-the-road salesmen, so we started to look at the areas we did a lot of business, and areas with growing populations and identified potential locations that could help us expand our presence even more.”

By 1999, Colonial had acquired or opened seven more branches, taking them to a total of 10 locations. It was around this time that Squires took his place within the organization.

“I first took on the role of Finance Manager in 1997 and then to General Manager in 1999,” Squires said. “I took over daily operations from this point and relied on the guidance of my father-in-law Bill as Colonial continued to grow and expand.”

That growth was symbolized by the 2005 acquisition of A.P.M. Limited. The purchase gave Colonial a strong presence in New Brunswick and added another Nova Scotia location, to complement its existing locations in Newfoundland and Nova Scotia. A.P.M. is celebrating its 75th anniversary this year.

“For two companies to have lasted so long in a highly competitive market place, it’s incredible. There has been so much change in this industry, so many technological advances, but we’ve kept up and remained just ahead of the curve,” Squires said.

He added, “But as much as we can say we’ve done well, this wouldn’t have been possible without our fantastic customers. Their loyalty and dedication over the years has been second to none. All the credit goes out to those customers and to our wonderful staff base for remaining true and loyal and believing in this organization. We wouldn’t be where we are today without them.”

Today, the Colonial Auto Parts/A.P.M. family boasts over 175 employees and they are PPG / Nexa’s only Platinum Distributors in Atlantic Canada.

Looking forward, Squires said he was particularly excited for the company’s centennial celebration in 2026, but in the short term he’s going to concentrate on building the Colonial and A.P.M. brand in Atlantic Canada.

“Basically, the future is going to be all about making sure we’re hiring the right people and exploring new avenues in which to enhance our companies,” Squires said. “It’s absolutely imperative to bring the right people in and offer the best training to our employees if we want to remain at the forefront of the industry.”